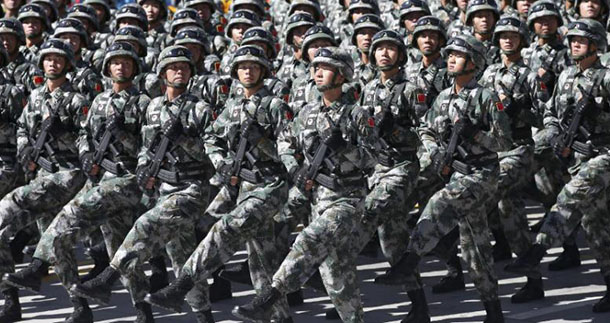 The Chinese People’s Liberation Army march at the square of the Potala Palace in Lhasa, capital of Tibet, September 8, 2015. Photo: File

Dharamshala, India — The Tibetan Government in-exile strongly condemns the communist state in Beijing— imperialist regime under a new name for latest moves, systematically labeling "Middle Way, Mother Tongue, Welfare Groups" as “underground forces” and “illegal" in the occupied Tibet, which clearly shows that the guidelines are designed to target Tibetans.

The Central Tibetan Administration on Monday accused the authoritarian regime in China for further increasing its "suppression and crackdown on Tibetans" in Tibet "under the guise of campaign against ‘organised crimes’", while labeling any expressions of supporting "Middle Way, protect Tibetan’s mother tongue or engagements of Tibetan Welfare Group as “underground forces” and “illegal”".

"Recent report and official circular issued earlier this year labeled any expressions that support Middle Way, protect Tibetan’s mother tongue or engagements of Kyidug ( Tibetan Welfare Group) as “underground forces” and “illegal”. The Chinese authorities in the so-called Tibet Autonomous Region (TAR) issued a circular earlier in February that ordered Tibetans to spy on each other and report on “underground forces”, the UN & Human Rights Desk of the Department of Information and International Relations said on August 6, 2018, citing a recent report by the Human Rights Watch.

Targeting crackdown on Tibetans amid Beijing’s campaign in January to crackdown on “organised Crime and Eliminating Vice”, the circular labeled support for Middle Way, protection of mother tongue, and speaking on behalf of “masses” as “underground forces” that must be “resolutely combated”. The decree further ordered any “cases of violations or crimes by underground forces” should be informed to the Public Security Bureau.

In its recently release report titled “”Illegal Organisations”:China’s Crackdown on Tibetan Social Groups,” the UN & Human Rights Desk said that the HRW gave details of the activities Beijing listed as “illegal,” including support for middle way, protection of mother tongue, and social grouping.

'The report underlined that the Chinese campaign aimed to attack “organized crime” and “mafia-like gangs” is used “to target suspected political dissidents and to suppress civil society initiatives” by the authorities in Tibet,' it added.

'The restrictions and guidelines are “intended to increase the authority of the CCP at grassroots level, by destroying any remaining influence of lamas and traditional leaders within Tibetan communities”, which clearly shows that the guidelines are designed to target Tibetans,' it said citing the report by the HRW.

Speaking with the official media, the Central Tibetan Administration spokesperson Sonam Norbu Dagpo termed the recent development as one of the regular move by the Chinese authorities. But he also said that the criminalisation of Tibetans who are involved in organisations or engages with local groups aimed towards advancing Tibetan culture, protecting Tibetan natural environment, and expressing devotion to religious heads and teachings, have often been reported in past years.

“However this particular move vividly reflects the extent to which the Chinese authorities can further increase suppression and crackdown on Tibetans under the guise of campaign against ‘organised crimes’,” says Sonam Norbu Dagpo who is also Secretary of the DIIR, CTA.

The Chinese authoritarian regime in Beijing began their invasion of Tibet in 1949, reaching complete occupation of the country in 1959. Since that time, more than 1.2 million people, 20% of the nation's population of six million, have died as a direct result of China's invasion and occupation. In addition, over 99% of Tibet's six thousand religious monasteries, temples, and shrines, have been looted or decimated resulting in the destruction of hundreds of thousands of sacred Buddhist scriptures.