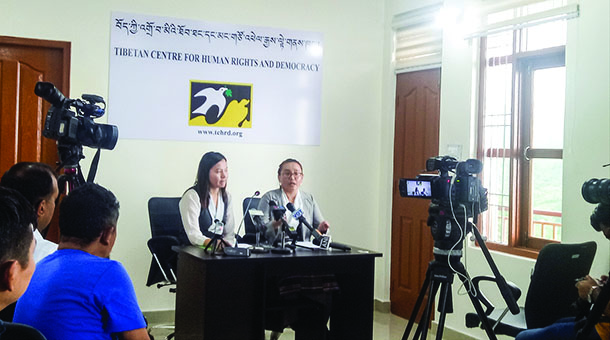 Dharamshala, India — 'It is very important to acknowledge that gender inequality exists in the Tibetan community although the situation of Tibetan women is comparatively better than other countries around the world,' a Tibetan rights group based in Dharamshala, India Friday said at a press briefing based on Civil Society Recommendations on Tibetan Women’s Empowerment Policy of the Tibetan government in-Exile.

Tibetan Centre for Human Rights and Democracy (TCHRD) highlighted a set of policy recommendations for the ‘Revised Women’s Empowerment Policy’, introduced by the Dr Lobsang Sangay led Cabinet in February 2017. The rights group said it will submit the recommendations to the Central Tibetan Administration (CTA).

The recommendations, in essence, implores policy makers to view the matter from the human rights perspective, the organization’s director Tsering Tsomo said during a press briefing in Dharamshala, India, on July 27, 2018. Key among the recommendations is also the argument over the lack of civil society consultation by policy makers when drafting the revised policy. She said that an official platform for feedback and participation by civil society machineries and grassroots to better the existing policy was needed.

The recommendation also seeks tougher stance on ‘Sexual and Gender-based Violence’ by categorizing the acts as violence as well as a criminal offense. While the policy mentions establishment of a “redressal mechanism” for victims, such measures have not been established since the policy was introduced over a year ago, Tsomo said.

Objection over use of dehumanizing stereotypes and language, and vague references were also included in the draft. “There should be acknowledgment that there is in fact no gender equality in the Tibetan community although the situation of Tibetan women is comparatively better than other countries around the world,” Tsomo said.

The six-point civil society recommendations for the CTA’s women empowerment desk are to acknowledge the existence of gender inequality and to formulate policies based on the Human Rights, timely review of the policies formed to check whether they are being executed and their viability, cooperation between the CTA’s women desk and NGOs.

They said that the recommendations exchange of ideas and opinions, assistance and support for those working for women empowerment, policies to prevent rape and abuse of women and to address such events, resources and decision making power for the women empowerment desk and being careful and to do away with stereotyping men and women while formulating policies.

The rights group also said that the recommendations were compiled from the “rights-based approach to gender equality and women’s empowerment workshop” it conducted last month. Therefore, the organisation has expressed strong hopes for the recommendations to be amended into the policy and be enacted as laws in the ‘Charter of the Tibetan in exile’.

According to the organisation, the initiative was participated by 30 women from the age group of 15-50 including students, teachers, farmers, nuns, entrepreneurs, tour guides, human rights researchers, members of regional chapters of Tibetan Women’s Association and also a trainer on gender sensitisation and gender equality.