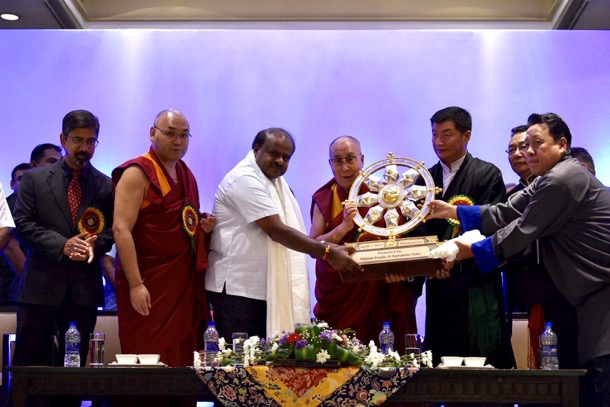 Bengaluru, India — Tibetan spiritual leader His Holiness the Dalai Lama and Chief Minister Haradanahalli Devegowda Kumaraswamy today graced the ‘Thank You Karnataka’ event organised by the five major Tibetan settlements in South India. The event celebrated 60 years of friendship, support and hospitality of the People and the State Government of Karnataka towards the Tibetan people.

The event was attended by a host of Indian leaders from the state and local government including the Chief Secretary of Karnataka, T M Vijaya Bhaskara, IAS and special guest, son of United Karnataka’s first CM, Shri S. Nijalingappa, according to a report by the Tibetan government official media.

Addressing the Thank You Karnataka event, His Holiness the Dalai Lama said the successful journey of the Tibetan people in the last 60 years in terms of education, culture, language and identity preservation has been inspired by the kind support of the Indian government.

“I feel great honour that we Tibetan refugees, a small community, found an opportunity to thank the Karnataka state and we thank India,” said His Holiness.

“This depicts one of Tibetan values, which is we never forget other’s kindness. As a preservation of our own cultural heritage, it is our duty to thank and express our appreciation to all those people who were very kind to us.

“So as elected political leadership mentioned, when we first reached here, we only knew the sky and the earth. But then, because of my close relations with late PM Jawaharlal Nehru from 1954 onwards, Tibetans found refuge in India.

“In 1956, I had serious discussion with him and have received very useful advice from him. He suggested that we should have separate Tibetan school in order to keep the Tibetan issue alive. He said education is the key factor. Immediately he set up a committee headed by Union Education Minister to oversee the construction of Tibetan schools and he fully supported Tibetan re-settlement”.

His Holiness also remembered his extraordinary friend and leader, late Shri Siddavanahalli Nijalingappa, the first Chief Minister of United Karnataka who approved the largest acres of land for Tibetan re-settlement in 1959.

“When the request for allocation of land was sent to all the state leader, the best response came from Karnataka. I have known him since 1956. He promised me he will support the cause. He extended an extraordinary support for the resettlement of Tibetans.

The Tibetan refugee community, he said, has since pursued a rigorous preservation of its language, culture, traditional values and knowledge including the study of Nalanda tradition.

“In upholding the Nalanda Tradition, Tibetans kept it alive and have brought it back to the land of its birth. As I always mention we are reliable chela for Indian guru. Now reliable chela found an opportunity to revive the ancient Indian knowledge in modern India.

His Holiness observed that although such knowledge developed in India, in the course of time interest in it deteriorated.

He suggested that reviving ancient Indian understanding of the mind and emotions, reason and logic, in India, is a contribution Tibetans can make.

“We were hopeless at a point in history, but through many decades, we have developed self-confidence. Yes, the knowledge we kept over 1000 years is now really useful to humanity in general and particularly to this country. Therefore my latest commitment is to revive the ancient Indian tradition.

Affirming his faith in the peaceful Tibetan struggle, His Holiness said the Tibetan issue will “never die” and that he foresees “a great future for Tibet”.

“We should not feel demoralised. As a people with over 3500 years of cultural heritage, we have great potential. So we must have self-confidence especially for youth, it is very very important,” he told the Tibetan youth.

President Dr Lobsang Sangay started off his speech by emphasising Buddhist notions of compassion and humility that teaches us to be grateful to those who helps us. It is because of the same notions that Tibetan administration is celebrating 2018 as the “Thank You” year to thank India and especially the state of Karnataka for their generosity rendered to Tibetans and enabling Tibetans to stand on their own feet today.

Dr Lobsang Sangay also thanked a special guest Prof. S.N Kiran Shankar, son of the late Chief Minister, S Nijallingappa of Karnataka. Late CM Nijalingappa was one of the most significant people who helped Tibetans when they first arrived in exile in Karnataka by providing them with land and place to live and thrive.

The President then went on to thank the present CM of Karnataka, H.D Kumaraswamy for continuing the same tradition of generosity and love towards Tibetans. He also extended his gratitude to all the Prime Ministers of India from PM Jawaharlal Nehru to PM Modi and especially the Government of India and political parties of India for their unwavering support to Tibetans in exile.

The President briefly narrated the account of His Holiness the Dalai Lama’s escape to India and said, “ Dalai Lama felt relieved on realising he is finally in the land of Buddha”.

Dr Lobsang Sangay acknowledged that it has been 60 years that Tibetans came into exile and for the past 60 years, India has been the only place where Tibetans have ‘not only survived but thrived’.

Despite China’s repetitive effort to destroy Tibetan religion and culture and basically the entire Tibetan civilisation, the President said that Tibetans were still able to uphold and preserve their religion, culture thanks to India and specially Karnataka for making the largest contribution towards reviving Tibetan religion and culture which otherwise had only 2% chance of survival under the Chinese occupation.

The President spoke of the bond shared between Karnataka and Tibet as not just a bond between a state and an administration rather one that extends beyond a political boundary. He cited few examples to show the love and compassion shared between the two which are based solely on the shared sense of brotherhood.

Dr Lobsang Sangay once again expressed his sincere thanks to India and especially to Karnataka for the kind of support extended by them to Tibetans as one which no country has ever done for Tibet.

Concluding his speech, the President also reminded that India is highly fortunate to have an excellent messenger of peace and advocate for the country like no other in the form of His Holiness The Dalai Lama who regards himself as the son of India.

Speaking in the same vein, Speaker Khenpo Sonam Tenphel, Tibetan Parliament-in-Exile said the guru-disciple relationship between India and Tibet had flourished since the establishment of Nalanda Tradition of Buddhism in Tibet and had further deepened with India becoming its exile home.

He recollected a statement by veteran Indian politician Moraji Desai who said the unique connection between the Indian and Tibetan people were like two branches of the same Bodhi tree.

Chief Minister Haradanahalli Devegowda Kumaraswamy, Karnataka Government said, “It is indeed a privilege and honour to take part in the august presence of the great spiritual leader, His Holiness the Dalai Lama. To have strong bonding with Tibetans.

“For centuries, Tibet and India have shared unique culture and historical relationship. Tibet’s connection with India had deepened after India offered exile for Tibetans.

“In Karnataka, the then CM of the state, warranted to provide shelter to Tibetans without any second thought and today they have become one among us. Today we have 5 settlement in Mysore, Uttara Karnataka, Champaranagra districts.

“Those living in these settlements have made their own contributions for Karnataka. And I believe that the Tibetan community is ever resilient and best positioned for the next journey.

He assured his utmost support and cooperation for the Tibetan people and offered his high salutations to HIs Holiness the Dalai Lama.