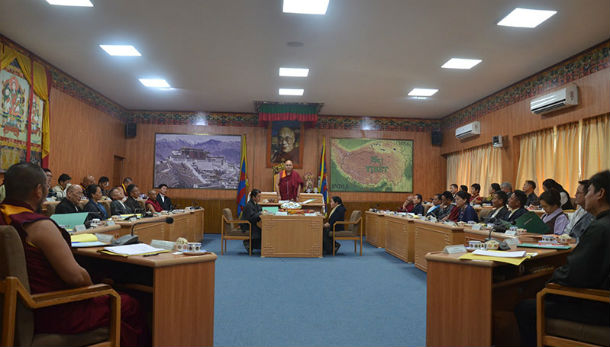 Khenpo Sonam Tenphel, Speaker of the Tibetan Parliament-in-Exile delivering the opening remarks of the sixth session of the 16th Tibetan Parilament-in-Exile, in Dharamshala, India, on September 18, 2018. Photo: TPI/Yangchen Dolma

Dharamshala, India —The 16th Tibetan Parliament-in-Exile convened its 6th session on September 18, 2018, pledging to take strong initiatives and make persistent efforts to alleviate the sufferings of Tibetans inside Tibet and peacefully resolve the issue with China.

The session began with the opening remarks of Mr Khenpo Sonam Tenphel, Speaker of the Tibetan Parliament, expressing his grave concerns at the deteriorating situation of human rights in the Tibetan territory in China. He also criticised China’s blatant violation of religious freedom and practice in the Tibetan Buddhist community.

Speaker referred to the U.S. Commission on International Religious Freedom (USCIRF) annual report on the state of religious freedom in selected countries including China. The commission had expressed specific concerns over the deteriorating conditions of freedom of religion or belief and related human rights in China.

“The Tibetan parliament is also greatly concerned about Tibet’s fragile ecosystem and China’s flawed environmental policy. China’s incessant and flagrant exploitation of Tibetan environment, resources and waters not only undermines Tibet’s ecosystem, but it could also contribute to an unrestorable environmental crisis and climate change across Asia in the foreseeable future,” he said.

The Speaker further went on to appreciate and express his gratefulness towards His Holiness the Dalai Lama for his unconditional support towards the Tibetan freedom struggle and his in exhaustive efforts towards the greater good of the world. The parliament reaffirmed its commitment to follow and fulfil the noble wishes of the most revered leader.

He requested and reminded the members of the parliament to pay respect to the formalities of the parliamentary proceedings and participate in a healthy discussion keeping in mind the interest of six million Tibetans in their hearts. “The members are also advised to uphold Tibetan values and conduct oneself as a true representative of six million Tibetans.”

The inaugural session of the parliament proposed an official resolution of solidarity with the sufferings of Tibetans inside Tibet. It also unanimously proposed three official resolutions of mourning to condole the demise of former Deputy Speaker of Tibetan Parliament DrashiGyaponKelsangDadul; former Indian PM Atal Bihari Vajpayee and US Senator John McCain.

The session is to last for 10 days and so conclude on 28 September.