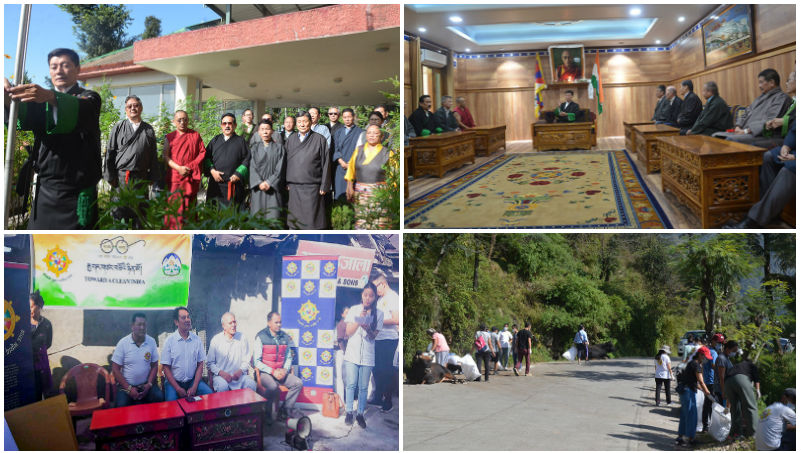 Dharamshala, India — The Central Tibetan Administration led by President Dr Lobsang Sangay, celebrated the occasion of Gandhi Jayanti at the Kashag Secretariat. This occasion marks the 150th birth anniversary of Mahatma Gandhi, an iconic figure of Ahimsa (non-violence) who better known as the father of the nation.

The event began with the flag hoisting ceremony by the President while the Indian national anthem was being played at the background. Addressing the media, the President recalled the non-violence resistance movement promoted by Gandhi in his freedom struggle and reestablished CTA’s commitment to follow the same ideology in Tibet’s freedom struggle under there guidance and vision of His Holiness the Dalai Lama. Since the launch, 130 crore Indians including lakhs of government officials have paid tribute to Mahatma Gandhi in the form of the Swachh Bharat Mission (SBM). The nationwide campaign was launched on 2 October in 2014 from Rajghat with an objective to make the country open defecation free by 2019.

The CTA-organised Swachh Bharat Abhiyaan was also flagged off at the McLeod Ganj Square by Kalon of Department of Health, Choekyong Wangchuk, Additional Commissioner of Municipal Corporation, Prabha Chaudhary, President of Indo-Tibet Friendship Association, Ajay Singh and local Pradhans. “The Central Tibetan Administration is celebrating the year 2018 as Thank you Year with a series of yearlong event spanning across India to express our deepest and heartfelt gratitude to the Government and People of India,” Health Kalon said.

“India has been a second home for Tibetan people and provided the most support for the Tibetan people than any other country. Through today’s cleanliness program, we join with the clean India pledge led by PM Modi Ji as a mark of our utmost gratitude to this great country,” he remarked.

He also compared the non-violent struggle of the Tibetans for their land to the non-violent struggle led by Mahatma Gandhi for the freedom of India. He expressed his support and hoped that the Tibetans will be successful in their peaceful struggle just as Mahatma Gandhi was for as both follow the same principles. Settlement Officer Dawa Richen delivered the vote of thanks. Tibetans in Dharamsala, including staff of Central Tibetan Administration, TCV schools, Tibetan Institute of Performing Arts, Tibetan NGOs and members Norbulingka will take part in a door-to-door cleaning movement starting from Dal Lake-Mcleod Ganj-Main Temple-Gangkyi-Gamru-lower Dharamsala up till Norbulingka.

Clad in ‘Thank You India’ T-shirt, Tibetans, young and old in Tibetan settlements across India, from Jammu and Kashmir to Karnataka, from Arunachal Pradesh to New Delhi led a daylong Clean India movement.