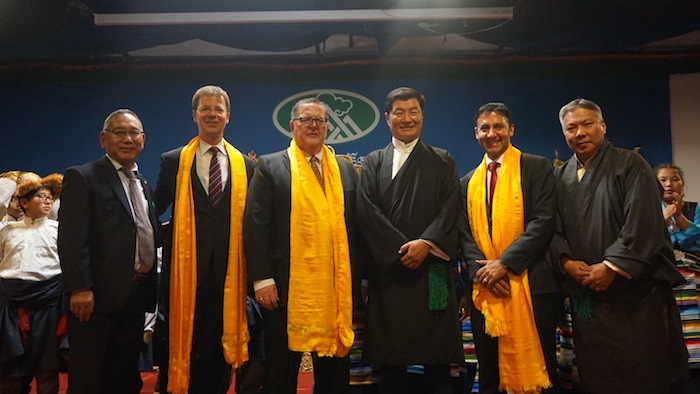 Toronto, Canada — The government of Canada yesterday announced a $5.4million ($5,408,824) in funding for education of Tibetan youth in India and Nepal.

The announcement was made by Arif Virani, Canadian MP, on behalf of the government of Canada in the presence of President Dr Lobsang Sangay, Ngodup Tsering, representative of His Holiness for North America and members of the Tibetan community at the Parkdale Centre for Innovation, according to the Office of Tibet, Washington DC.

Virani is the MP for Parkdale-High Park and also the chair for Parliamentary Friends of Tibet (PFT) Canada friendship group. Parkdale is home to the largest concentration of Tibetan refugees and immigrants outside of India, and this is Sikyong Dr Lobsang Sangay’s first official visit to Parkdale.

The funding is for a five-year project -Enhancement of the Education and Resilience of Tibetan Youth that will contribute to building the capacity of the Tibetan education system in India and Nepal which includes 70 schools and a current enrollment of approximately 22,000 students.

The project that will be implemented by Agriteam Canada, in cooperation with the Central Tibetan Administration (CTA), and build on the achievements of the Improving Education Quality and Learning for Tibetan Children project in India and Nepal (project that ran from 2015 to 2017).

The funding was approved by the Honourable Marie-Claude Bibeau, Minister of International Development. Minister Bibeau is a steadfast advocate for women and girls right. In June 2017, Minister Bibeau launched Canada’s new Feminist International Assistance Policy, an innovative vision that makes Canada refocus its international assistance programming on helping the poorest and most vulnerable people through a gender sensitive lens.

The main objective of Canada’s Feminist International Assistance Policy is to empower women and girls as the best approach to eradicate poverty. When women and girls are able to reach their full potential, they are powerful agents of change.

Keeping Canada’s main objective at heart, Enhancement of the Education and Resilience of Tibetan Youth project will address the need to improve academic achievement through an enhanced gender-responsive teaching practices that promote cultural and linguistic preservation and better prepare Tibetan youth for the transition to work and post-secondary education.

A second announcement was done at the Tibetan Canadian Cultural Centre again by MP Arif Virani and his colleagues MP James Maloney and MP Sven Spengemann. The Tibetan centre is in MP James Maloney’s constituency of Etobicoke-Lakeshore.

He is also the co-vice chair of the Parliamentary Friends of Tibet friendship group. MP Sven Spengemann is an active contributing member of PFT and a personal friend and classmate of Sikyong. They have been instrumental in making the funding possible.

During the announcement, MP Virani expressed his continued support for the Tibetan cause and said this funding will be the first step towards many future collaborative initiatives with the Tibetan community and Sikyong thanked the government of Canada, minister Bibeau, the three MPs and everyone else who made this funding possible.