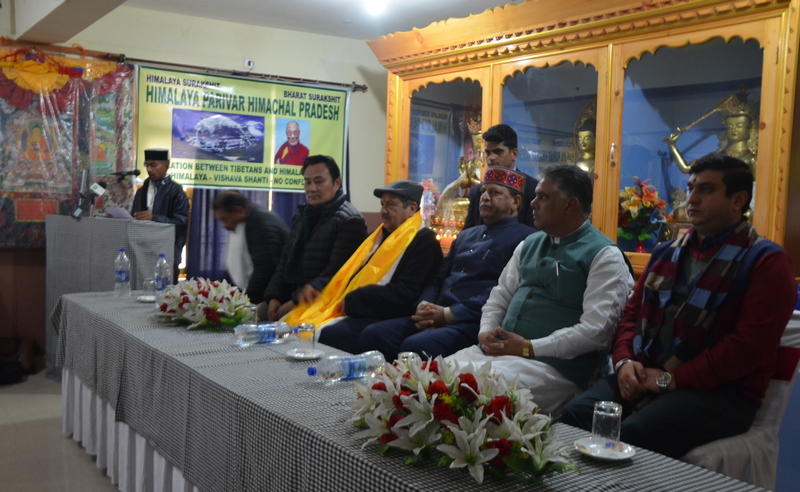 The Panel discussion was jointly organised by Himalaya Pariwar and Tibetan Settlement Office, Dharamshala. It was held on Wednesday, December 5, 2018 at the Youngling School attended by many well known and eminent personalities.

The function started with a traditional dance performance by the school children dressed in traditional chupa and then later offered Khataks to all the guests of the Panel. This was followed by lighting of candle and a brief introduction by Dawa Rinchen into the subject matter of discussion. He criticised the attitude and stance of the Chinese government due to their irrational and reckless disregard for human rights in Tibet.

He also mentioned about the ever growing international pressure on China by the United States by passing a bipartisan Reciprocal Access to Tibet Act to open up the isolated and repressed areas to U.S. citizens whom Chinese officials prevent from travelling freely. He then invited the main speaker Mr. Indresh Ji to introduce the topic with better insight and acumen.

Indresh talked about the importance of India and Tibet working together against China. He also remarked that there are two kinds of borders i.e. army borders and peoples border and the peoples border are always peaceful with no guns or war example is the border between India and Nepal and so we should force china to negotiate and try and replace war by peace.

Kalon Choekyong Wangchuk raised the current environmental issues faced by Tibetans inside Tibet as a result of the excessive mining and unchecked constructions in Tibetan regions. "Chinese authorities have been conducting excessive mining, development and dam construction projects in the Tibetan areas. Such unchecked activities are proving extremely hazardous for the local Tibetans in the region," he said.

We are witnessing increased occurrences of landslides and rise of temperature on the plateau.  Most recently, the Bolu Township in Jomda and Palyul region of eastern Tibet were hit by such induced disasters,” Kalon added.

“Atleast 154 Tibetans have self-immolated to protest the Chinese government. Such sacrifices by Tibetans in Tibet evidence that repression in Tibet under the Chinese rule is making lives unlivable,” Kalon said, urging the Chinese Government to address the legitimate grievances of people in Tibet.

The Panel discussion concluded with the understanding that communication is the key towards the freedom of Tibet. China has to be stopped from intruding in the Tibet autonomous region and the first step has to be the acceptance of the fact that the age of kingdoms is no longer, today we have the system of states and de facto sovereignty.- Tibet as a sovereign and independent nation.