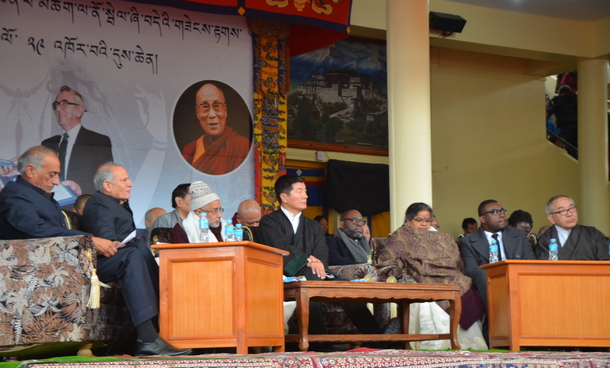 President Dr Lobsang Sangay with guests during the 29th Anniversary of Conferment of the Nobel Peace Prize on His Holiness the Great 14th Dalai Lama of Tibet, in Dharamshala, India, on December 10, 2018. Photo: TPI/Tenzin Dhargyal

Dharamshala, India — Hundreds of Tibetans and Tibet supporters gathered at the main Tibetan temple on the morning of December 10 to comemorate the 70th International Human Rights Day and to celebrate the 28th annual Nobel Peace Prize Day, a day dedicated to celebrating the presentation of the Nobel Peace Prize to His Holiness the Dalai Lama by the Nobel Committee in 1989.

The chief guest in attendance was Shri Ram Swaroom Sharma, a member of parliament from the governing party of India.

Shri Ram Swaroom Sharma dedicated his speech to expressing his gratitude to His Holiness the Dalai Lama for making Dharamshala such a cherished place to individuals across the world through spreading messages of love and peace.

Sharma also expressed India’s profound support of the Tibetan movement for freedom and vocalized his hope that the day Tibet’s issue will be resolved is near.

Special Guest Mr. Andra Papus Ngombet Malewa, President of Sassoufit, a Congolese Human Rights Group, echoed this sentiment and urged Tibetans to continue the fight for freedom. “We are not afraid. We are not afraid. Democracy is for all human beings.”

Traditional dance and opera was performed throughout the morning by members of the Lower Tibetan Children’s Village (TCV) School, Upper TCV School, TCV Gopalpur, Yangling School, and the Tibetan Institute of Performing Arts.