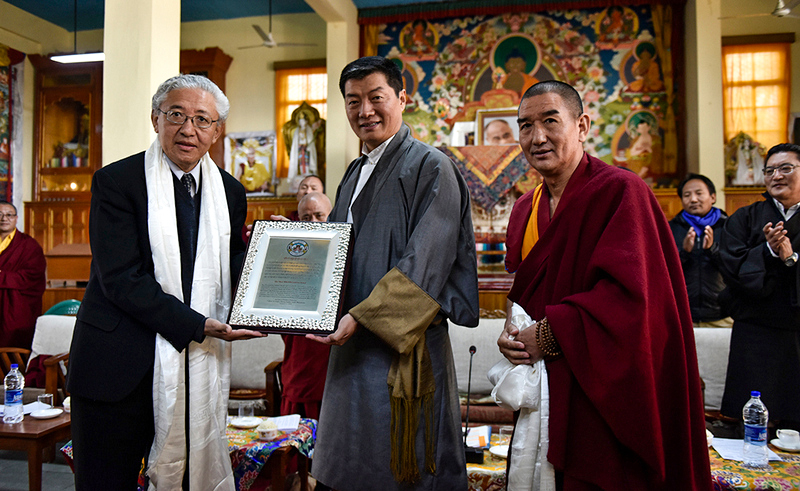 Dharamshala, India — The the Institute of Buddhist Dialectic (IBD) has awarded its highest Alumni honour, "The Three Wheels Recognition Award" to Dr Tenzin Dorjee, Chair of the US Commission on International Religious Freedom for his distinguished contribution in the preservation and promotion of Tibetan language, religion and culture.

The award event was held at Sarah College for Higher Tibetan Studies, in Dharamshala, India where the Education Kalon Dr Pema Yangchen inaugurated the second edition of ‘Communicating Across Culture’ authored by Stella Ting-Toomey and Dr Tenzin Dorjee.

Dr Tenzin Dorjee was awarded the Institute of Buddhist Dialectic and Sarah College for Higher Tibetan Studies’ highest Alumni honour, "The Three Wheels Recognition Award" for his distinguished contribution in the preservation and promotion of Tibetan language, religion and culture; distinct service in translation; and achievements of excellence in the academic and public field.

President of the Central Tibetan Administration Dr Lobsang Sangay while congratulating Dr Tenzin Dorjee for his achievements, said, “As a first Tibetan Buddhist to be elected at the helm of the US Commission on International Religious Freedom is a matter of immense pride for Tibetans all around the world."

“Dr Tenzin Dorjee is an inspiration to the new Tibetan generation who are ready to their mark in the emerging field of traditional Buddhist philosophy and modern education,” President Dr Sangay said Saturday morning while conferring the Award to Dr Dorjee, Chair of the USCIRF and a prominent Tibetan translator.

“In foresight, I believe Tibetan Buddhism could become the religion of 21st and 22nd century. The universal humanitarian values that are the bedrock of Tibetan Buddhism, secular and pragmatic approach of Tibetan Buddhism can act as an antidote to the current moral crisis in the world and help our societies become more compassionate and equitable."

In his acceptance speech, Dr Tenzin Dorjee said, “It is a prestigious honour to receive this award from the Institute of Buddhist Dialectic and Sarah College, where I have spent years studying Buddhist philosophy and received precious teachings from His Holiness the Dalai Lama and my root guru, the late founder director of Sarah, Ven Lobsang Gyatso. I accept this award not as a recognition of the individual but in honour of the work and service to which I have committed with great hard work.”

Dr Dorjee is a published author and translator of Tibetan Buddhism into English and had also served as translator to His Holiness the Dalai Lama during teachings and talks in India and USA. He is also a prominent native translator (Tib: Lotsawa) of over 30 years expertise.

He was elected as Chair of the U.S. Commission on International Religious Freedom (USCIRF) on 12 June 2018. Chair Dorjee was first appointed to the Commission on 8 December 2016 by House Democratic Leader Nancy Pelosi (D-CA). He was reappointed by Leader Pelosi on 10 May 2018. USCIRF is a federal government commission established by the 1998 International Religious Freedom Act (IRFA) that monitors the universal right to freedom of religion or belief abroad. Read his full bio here.

Geshe Samten Gyatso, new Director of the principal "Institute of Buddhist Dialectics" (IBD), Dharamshala and its branch the College for Higher Tibetan Studies (CHTS), Sarah said, “Considering the vision of late founder director Ven Lobsang Gyatso, it has been decided that from this year onward, ‘The Three Wheel Recognition Award’ would be conferred to the alumni of this institute, who have displayed excellence in the field of Tibetan Buddhism and Culture in particular and society in general.”

“The conferment of the ‘Three Wheel Recognition Award’ is based on the aims and objectives set by His Holiness the 14th Dalai Lama and late founder director of the Institute; distinct achievement in the practice and preaching of dharma; distinct contribution in the preservation and promotion of Tibetan language and culture; distinct service in translation and achievements of excellence in other fields by adhering the wishes of His Holiness the 14th Dalai Lama and the policies of Central Tibetan Administration,” Geshe Gyatso said.

The Three Wheel is the official emblem of the principal "Ïnstitute of Buddhist Dialectics" (IBD), Dharamshala and its branch the College for Higher Tibetan Studies (CHTS), Sarah. Dr Dorjee is the first recipient of the Three Wheels Recognition Award given by the IBD and it's sister college CHTS.

Dr Dorjee is an Associate Professor at the Department of Human Communication Studies, California State University, Fullerton. He is a translator of Tibetan and Buddhist works and has served as translator for His Holiness the Dalai Lama. He has also been recognized with numerous honors for his scholarship and advocacy on behalf of the Tibetan community. As a Commissioner he has traveled to Burma and Iraq to monitor religious freedom conditions and testified before the U.S. Congress on religious freedom violations in Tibet and China.

For nearly five decades, hundreds of young Tibetans have graduated from the Institute and its branch and are working in Tibetan society in various capacities, such as teachers, writers, journalists, translators, research scholars, lecturers, principals, translators, and government officials. About 20% of teachers serving in different Tibetan schools under Central Tibetan Administration are Sarah trained teachers, according to the CTA. The College as a branch of the IBD is an advanced Tibetan studies college founded in 1991 by the late Gen Lobsang Gyatso under the guidance of His Holiness the Dalai Lama.