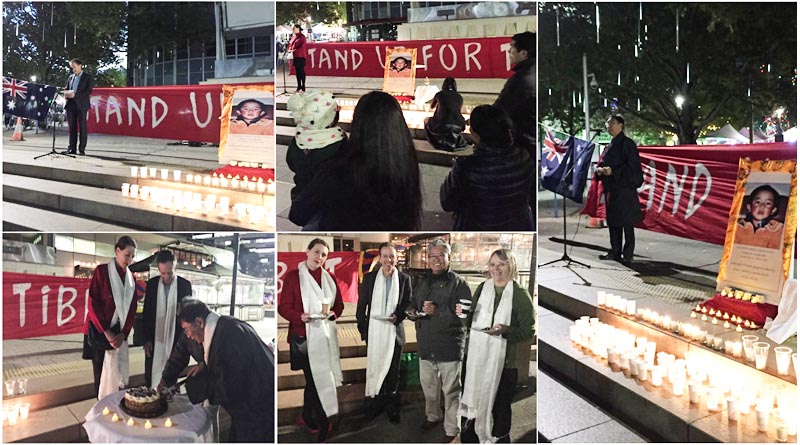 Tibetans and supporters gathered in Canberra to mark the 30th birthday of His Holiness the 11th Panchen Lama, to protest his enforced disappearance by the Chinese government and to call for his release. Photo: TPI

Canberra —Tibetans and supporters gathered on a chilly evening in Canberra to mark the 30th birthday of His Holiness the 11th Panchen Lama, Gedhun Choekyi Nyima, to protest his continued enforced disappearance since 1995 by the Chinese government and to call for his release.

“The Panchen Lama, as one of the most important spiritual leaders of Tibet and now the longest serving political prisoner, is a symbol of the ongoing suffering and repression of the Tibetan people and their unique religious and cultural identity,” Minister Rattenbury said. “The governments of the world have not been doing enough for Tibet. This must change. …I will always stand in solidarity with the people of Tibet in your struggle for freedom.”

“Soon things will change. The Chinese government’s oppression of the Tibetan people, their language and religion, must end. Here in Australia it is our sincere wishes that the Panchen Lama, and the people of Tibet, will be free,” said Le Couteur.

Media Liaison and Campaign Officer for ACT Tibetan Community, Australia, Tsering Samkhar told the TPI that The event concluded with a cake cutting ceremony and prayers for His Holiness the 11th Panchen Lama’s safety, wellbeing and long life.