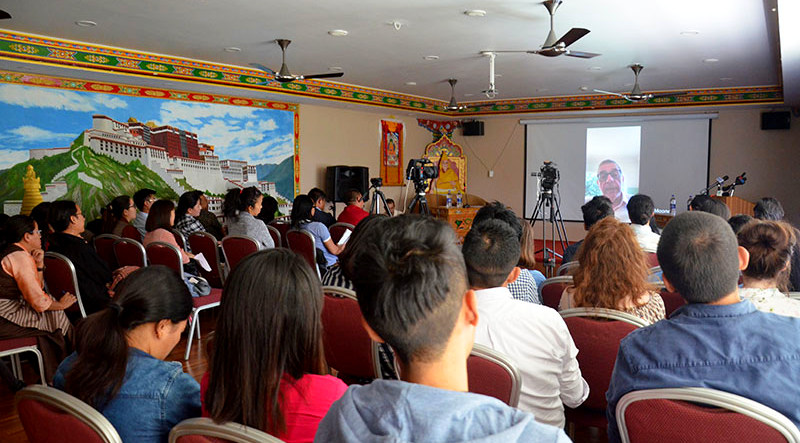 To mark the International Press Freedom Day 2019, the Tibetan Center for Human Rights and Democracy (TCHRD) and the Association of Tibetan Journalists (ATJ) have organised a panel discussion on “Freedom of Movement and Access in Tibet”, in Dharamshala, India, May 3, 2019. Photo: TPI/Yangchen Dolma

Dharamshala, India —To mark the International Press Freedom Day 2019, a group of exile Tibetan human rights activists and journalists strongly criticized the Chinese government for violating the rights to freedom of expression and demand an end to a crackdown on press freedom and censorship in Tibet.

In a joint press release, The Tibetan Center for Human Rights and Democracy (TCHRD) and the Association of Tibetan Journalists (ATJ) called on the international community to engage with Chinese government and exert pressure on Chinese authorities to remove all policies and practices that systematically violate the right to freedom of movement and travel in Tibet. 'Chinese authorities must allow human rights monitors and journalists to make independent trips to Tibet without government interfering,' it added.

The panel discussion on “Freedom of Movement and Access in Tibet” was organised by the TCHRD and ATJ, to mark the World Press Freedom day —highlighting systematic restrictions on the rights to freedom of movement and freedom of speech and expression inside Tibet, imposed by Chinese authorities.

Chinese authorities have imposed a systematic restrictions regarding the freedom of speech and expression in Tibet along with the international human right monitors and forbidding the journalists to access and travel, the information and territory respectively. Even the privileged journalists reporting from Tibet are under the constant surveillance and exposed to intimidation and harassment of source. The veteran journalist, Paul Mooney said “we were monitored. We were followed. We were under surveillance often. Sometimes police will follow us. Sometimes they block us from speaking to peoples.”

He continued “In the 18 years i was in Beijing, I applied to go to Tibet about seven times , i was rejected each time. It was very difficult fro foreign journalists to go to Tibet. There were few cases where they invited foreign journalists. But when they went, they were restricted, they were followed, and it was very difficult to speak to anyone. And if you did manage to sneak away from the minders and to talk to someone, that person would probably get in trouble for talking to you.”

The press Club's latest survey of the March, 2019 reported about the serious obstacles in reporting from Tibet that prohibits them from obtaining accurate information about the situation in the so called Tibet Autonomous Region and other Tibetan areas.