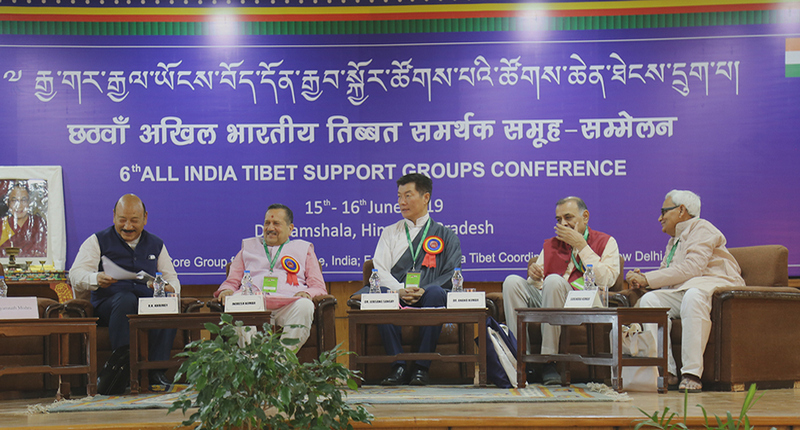 The gathering discussed a wide scope of agenda including the "Middle Way Approach" and the "7th World Parliamentarian Convention on Tibet," recently concluded in Latvia’s capital, Riga.

The meeting organised by the Core group for Tibetan Cause was held at T-Building, Gangchen Kyishong, Dharamshala on 15th -16th June 2019 in commemorating the 60th years of Tibetan people and its spiritual leader His Holiness the Dalai Lama in exile in India. This was in coincidence with the 60th year of first All India convention on Tibet in Calcutta that was first held in 1959 under the leadership of Freedom Fighter Jai Prakash Narayan.

The 6th All India Tibet Support Groups Conference concluded on 16th June 2019 after a two-day discussion on the strategies and action campaigns on the Five Fifty Vision of Central Tibetan Administration based on the recommendations from the Five Fifty Forum on Resilience and The Youth Five Fifty Forum.

The conference witnessed the participation of 216 representatives from over 21 states across India. The conference rightfully represented the deep connection that India and Tibet share, with so many Indians from diverse backgrounds across India showing solidarity with the Tibetan cause.

Shri Rinchen Khando Khrimey, National Convener, Core Group for Tibetan Cause described the conference as an extraordinary opportunity to reinvigorate and re-strategize activities and initiatives of the Tibet Support Groups in view of the present critical scenario of Tibet while focusing on the strategies and action campaign on 5/50 vision of the CTA.

He said the conference reaffirms the same spirit of support, solidarity, and friendship expressed at the first ever All India Tibet Convention in 1959 under the leadership of Loknayak Jayaprakash Narayan.

“We, as friends of Tibet, pledge to carry forward our commitment towards the Tibetan freedom movement in full strength and vigor and reaffirm the same spirit of support, solidarity and friendship expressed at the first ever All India Tibet Convention in 1959 under the leadership of Loknayak Jayaprakash Narayan,” Shri Khrimey added.

Dr Anand Kumar, National President, India Tibet Friendship Society said it was a good moment to review the sixty long years of the engagement of Indian supporters and friends of Tibet and remarked upon how “the little assembly of citizens voice in Kolkata grew into a big river of consciousness, humanity, solidarity and citizen’s voice in these sixty years.”

“It all started as a small candle of light in 1959 under the noble guidance of Loknath Jai Prakash Narayan to declare and say it loud and clear that if Tibet is occupied by the evil designs of our vile neighbor People’s Republic of China, they should not feel disappointed. They have India, which is not only their neighbor but also their Gurudesh, home of Buddha. You are welcome to stay here and hold on to your dignity, identity, and the quest for justice.”

“On one hand, the little assembly of citizens voice in Kolkata has grown into a big river of consciousness, humanity, solidarity and citizen’s voice in these sixty years.” He continued, “That little light is today grown into a large flame which is symbolized by the Tibetan Government in Exile in Dharamshala.”

“The Tibetan transition is so so remarkable for a variety of reasons including their wisdom, value, commitment, and resilience against one of the mightiest empires that we know today,” said Dr Anand.

Shri Indresh Kumar discussed the unprecedented unrest at India-China border which once used to be the friendly and harmonious border between Tibet and India. He agreed with the rest of the speakers in identifying China’s political, military advances as an escalating threat to India’s national security and assured that India won’t deter from taking bold actions if such advances are not checked.

Keynote Speaker and CTA President Dr Lobsang Sangay delivered a passionate speech in Hindi and said that no other country has done more for Tibet than India and no people of a country has been so kind, generous as the Indian people is to Tibetans.

“And I hope that India retains its unparalleled support for Tibet until our aspirations are realized,” he added. Dr Sangay, however, stressed that an informed political discourse on Tibet should be enabled within the Indian civil society.

Urging India to be at the forefront in fighting the imperialist and expansionist designs of China, the CTA President also mentioned the Reciprocal Access to Tibet Act, a US legislation that calls for ban on access for Chinese government officials responsible for restricting access for US journalists, diplomats, tourists, and citizens, including Tibetan Americans to Tibet.

He urged India to speedily adopt such policies and legislation that enables reciprocity with China and not punishment or retaliation.

President Dr Sangay along with other key speakers unveiled the Hindi translation of CTA’s publication titled ‘Tibet was Never Part of China but the Middle Way Approach Remains a Viable Solution’.