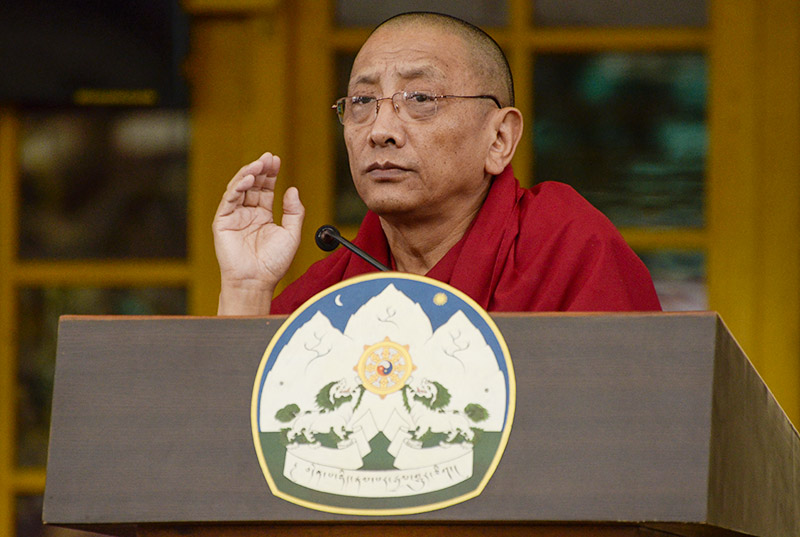 Dharamshala, India — Responding to the Asian Buddhist Conference for Peace kicked off recently with a China's heavy pressure on Mongolia in an attempt to expand Beijing's aggressive political influence, a top Tibetan government official said that the unfortunate development was the clearest sign yet of China’s aggressive campaign of undermining core democratic freedoms across the world.

The communist totalitarian regime in Beijing has pressured Mongolia into denying permits for representatives of the Tibetan-government-in-exile, officially known as Central Tibetan Administration (CTA), who were formerly scheduled to participate in the Asian Buddhist Conference for Peace in Mongolia starting Friday, June 21, 2019.

'Minister (Tib: Kalon) of Department of Religion and Culture, Venerable Karma Gelek Yuthok and other representatives from the Central Tibetan Administration’s Religion and Culture department who were expected to participate in the Asian Buddhist Conference, were denied visa at the very last moment, according to the CTA official media, "Tibet News Bureau".

Speaking exclusively to Tibet News Bureau, Minister Ven Gelek Yuthok said: "the unfortunate development was the clearest sign yet of China’s aggressive campaign of undermining core democratic freedoms across the world, and even hampering the basic exercises of other countries through severe political intimidation."

“The forced cancellation of our participation as representatives of one of the greatest contributors to the Buddhist tradition worldwide poses serious questions. Even more so, in the light that China itself is home to the largest Buddhist population in the world,” the Religion and Culture Minister or Kalon added.

Describing the incident as alarming and worrying, the Minister said: "such cases should prompt the countries in questions to stand up and defend their core freedom and democratic principles instead of capitulating to it."

The Asian Buddhist Conference for Peace was founded in 1970 in Ulaanbaatar, Mongolia, as a voluntary movement of followers of Buddha, both monks and lay, striving to disseminate and implement the teachings of the Enlightened One on peace and harmony, compassion and loving-kindness for all sentient beings on Earth.

It aims to “bring together efforts of Buddhists in support of consolidating universal peace, harmony, and cooperation among the Asian countries and its people.”

Despite pressure from the Chinese authoritarian state, the Tibetan Buddhist delegation was led by Ven Thupten Ngodup, the medium of state Nechung Oracle. His Holiness the Dalai Lama’s Honorary Representative Telo Tulku Rinpoche also joined and presented His Holiness the Dalai Lama’s message to the conference on the occasion of the 50th anniversary of the ABCP and spoke during the 2nd-day plenary session dedicated to “Preservation of Heritage and Values.”