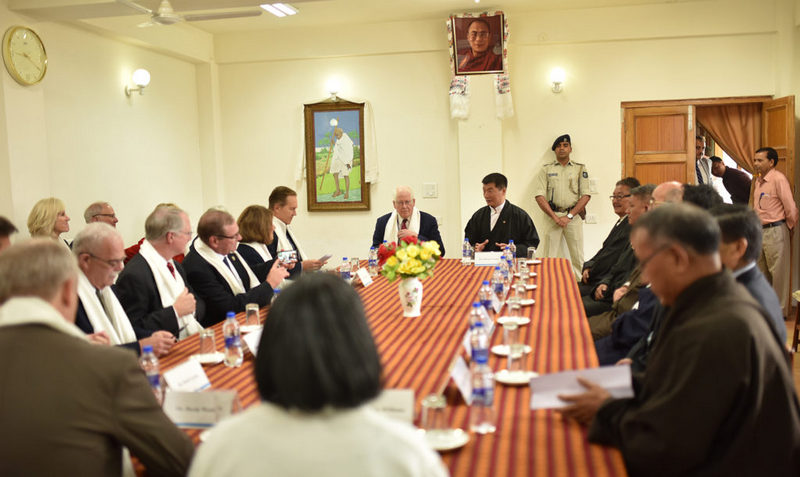 Dharamshala, India — The President of the Tibetan-government-in-exile, Dr Lobsang Sangay and members of his Cabinet met yesterday with a delegation from the US Congress led by Congressman and Chair David Price and Vice-chair Vern Buchanan, in Dharamshala, India.

The six-members U.S Congressional delegation of the House of Democracy Partnership led by Chair Congressman David Price and Co-chair Vern Buchanan had an hour-long interaction with the President Dr Lobsang Sangay and the cabinet ministers, at the Kashag Secretariat, Dharamshala, India, on August 3, 2019.

Speaking to members of the media, Congressman David Price affirmed his and the delegation’s solidarity with Tibet and the Tibetans in the preservation of Tibetan religion and culture. He also assured to provide all the necessary assistance and support for the cause of Tibet to the best of their abilities.

During the meeting, Congressman Price led six-members U.S Congressional delegation have conveyed their support in promoting a system of democracy worldwide and meanwhile assured their complete support to the system of Tibetan democracy in exile which they greatly appreciate.

Dr Sangay explained the delegation on the evolution of Tibetan democracy in exile during the conversation and introduced them of the various departments under the Central Tibetan Government in exile.

The Tibetan President also sought support for the revised and updated Tibet Policy Act (of 2002) which will be tabled in the upcoming Congress session.