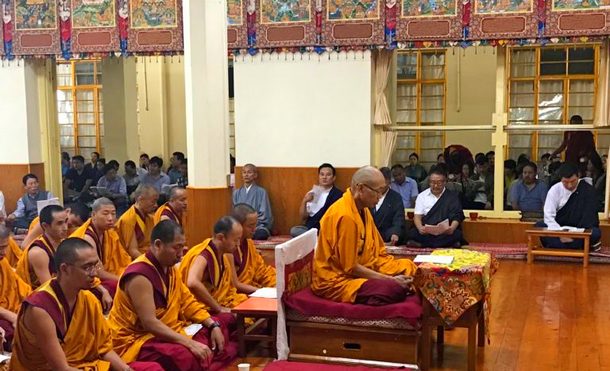 President Dr Lobsang Sangay, Kalons or Ministers and parliamentarians, Secretaries and monks during the prayer service held at the Tibetan temple in Dharamshala, India, on August 8, 2-019. Photo: DIIR/CTA

Dharamshala, India — "We pray for Tibetan Heroes and Martyrs who have sacrificed their lives for Tibet," said Dr Lobsang Sangay, President of the Central Tibetan Administration (CTA).

Marking the 3rd anniversary of the 15th Kashag led by the Tibetan President Dr Lobsang Sangay, the CTA Thursday organised a prayer service at the main Tibetan temple in Dharamshala, India, to express solidarity with the sufferings of Tibetans inside Tibet, including Tibetan self-immolators and their families. The monks from the Namgyal Monastery, India led the Prayer session, attended by Tibetans and supporters.

Dr Lobsang Sangay, the democratically elected political leader or President of the CTA, attended the prayer service along with the members of Kashag, Secretaries of various departments, Tibetan Parliamentarians, Tibetan Justice Commissioners, Tibetan civil servants, and the Tibetan community.

The prayer service is held annually to recall and pay tribute to those Tibetans who have sacrificed their lives and limb for the greater cause of Tibet, said the official media of the CTA. It said, "Since the occupation of Tibet by China, tens and thousands of Tibetans have passed away under their repression. Many have also been imprisoned and oppressed inhumanely and still continues to do so".

“We pray for Tibetan Heroes and Martyrs who have sacrificed their lives for Tibet, and for their families. And also attain Genuine autonomy through Middle way approach and return of His Holiness the Dalai Lama to Tibet. We pray for that,” President Dr Sangay told members of the media.