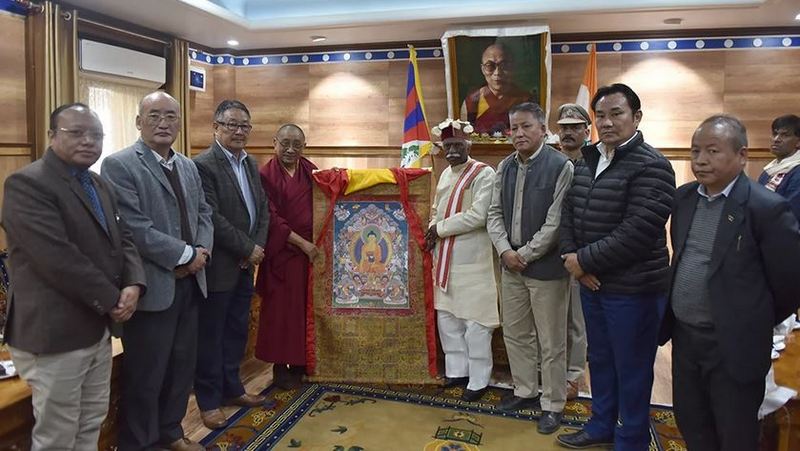 Dharamshala, India — "The issue of Tibet has become a global issue today. I never felt that your issue is other’s issues but I look at it as an issue of any Himachal Pradesh dwellers face,” said Shri Bandaru Dattatreya, governor of Himachal Pradesh who recently visited the Tibetan government in-Exile, in Dharamshala, India, to meet with Tibet's exiled religious and political leaders on November, 18, 2019.

While speaking to members of the Tibetan Parliament in-exile in Dharamshala, India, governor Dattatreya said that he has received a special audience with the spiritual leader of Tibet, His Holiness the 14th Dalai Lama on Monday morning.

He later recalls in the parliament about His Holiness talking on how Buddhism was established in India and then spread across the globe. He also remembers how His Holiness mentions that both spiritual and scientific development should go hand in hand.

Governor Dattatreya also met with cabinet ministers of the Central Tibetan Administration (CTA). The ministers thoroughly apprised the Governor on the CTA’s robust administration and governance of more than 100,000 Tibetans across India, Nepal, and Bhutan and the unparalleled support extended by the Government of India and the Government of Himachal Pradesh towards the CTA and Tibetan people.

While meeting with the members of the Tibetan Parliament-in-Exile on the same day, Dattatreya was heartily welcomed by Tibetan Parliamentarians led by the Deputy Speaker Acharya Yeshi Phuntsok. Ven Phuntsok thanked the governor for his visit and thanked India for its support for the people of Tibet and issues related to Tibet for such a long time.

The Deputy Speaker briefed the governor on functions of the Tibetan Parliament-in-Exile and their never-dying spirit of fighting for the freedom of Tibet. He also touched upon communist China's interference in the process of recognizing His Holiness the Dalai lamas’ successors and how people of Tibet are strongly against China's interference.

The Governor addresses, “I am happy that the issue of Tibet has become a global issue today. I never felt that your issue is other’s issues but I look at it as an issue of any Himachal Pradesh dwellers face”.

He concludes his address to the members of the Parliament with this strong message, “I have faith that Tibetans searching for their truth shall become reality one day, I also wish Tibetans who are fighting for the truth shall win, my wishes to all Tibetans especially those great numbers living in Himachal Pradesh”.

After the session, the Governor along with the members of Parliament inspected the parliament house. The Deputy Speaker briefed the governor about how Tibet acts as an oasis for ten of its neighboring countries including India.

Until 1949, Tibet was an independent Buddhist nation in the Himalayas which had little contact with the rest of the world. It existed as a rich cultural storehouse of the Mahayana and Vajrayana teachings of Buddhism. Religion was a unifying theme among the Tibetans - as was their own language, literature, art, and world view developed by living at high altitudes, under harsh conditions, in a balance with their environment.