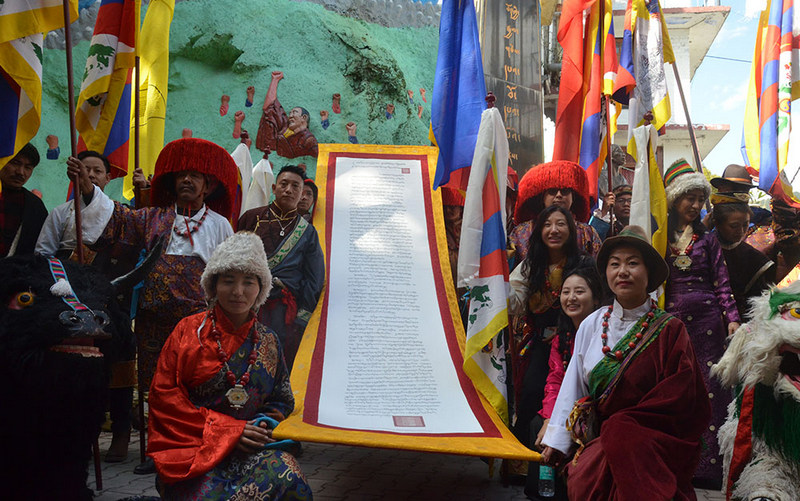 Protesters holding a large banner of the Proclamation of Independence for Tibet Issued by the 13th Dalai Lama, in 1913, in Dharamshala, India, on February 13, 2020. Photo: TPI/Yangchen Dolma

Dharamshala, India – 'The celebration of our Independence Day is a symbolic act of protest and a critical reminder for Tibetans that we have always been a free country before the Chinese occupation in 1959,” Rinzin Choedon, the national director of Students For Free Tibet-India (SFT-India) declares, to commemorate the 107th anniversary of the declaration of Tibetan Independence Day by 13th Dalai Lama in 1913.

'The communist-authoritarian regime in China has tried everything in its power to erase the history of Tibet and its rich tradition from the face of the earth let alone the violation of Human Rights in Tibet since 1959 and Tibetans shall continue to fight for truth” she told the gathering at the main square in McLeod Ganj on February 13, 2020.

SFT organizes a Majestic Walk to mark the 107th Tibetan Independence Day on 13th February 2020. Over 25 Tibetans walk the street of McLeod Ganj in full traditional attires to represent various parts of Tibet to raise undeniable evidence of Tibet being an independent nation, its past and the uniqueness of Tibetan culture. The theme highlights Tibetan cultural resistance. Tibetans used traditional dress, songs, and literature, ways to assert against the repressive Chinese rule since 1959.

The majestic walkers precede the streets in a single line without disturbing the usual rhythm of the markets, pedestrians and the vehicles. Participants chant catchphrase of free Tibet, long live Tibet while waving the national flag high. A long scroll of the ineradicable proclamation scripted in Tibetan by His Holiness the 13th Dalai Lama on 13th February of 1913 is carried by Tibetans in traditional dress. One of the main messages of the day on a long banner that reads, ‘Tibetans shall be happy in the land of Tibet, Chinese shall be happy in the land of China’, calling out the communist-authoritarian regime of China to leave Tibet and stop torturing Tibetans in the land of Tibet.

It was a powerful historical message to mark the historic event, a formal peace treaty concluded between China and Tibet in 821 and 823 demarcated the borders between the two countries and ensured that "Tibetans shall be happy in Tibet and Chinese shall be happy in China."

Rinzin Choedon, the national director of SFT sends a strong message to the totalitarian government in China, saying “Tibetans shall continue to fight for the truth with undying spirit and the celebration of our Independence Day is a symbolic act of protest and a critical reminder for Tibetans that we have always been a free country before Chinese occupation in 1959”. She further notes, “This critical work of securing our past history, we are paving the path for freedom in Tibet and shaping our future” at the main Square, in McLeod Ganj."

SFT said it started the February 13th campaign in 2013 on the 100th anniversary of Tibet’s independence as declared by the 13th Dalai Lama of Tibet on the 13th of February in 1913. SFT carried out different activities on every 13th February to emphasize the significance of the day ever since then. This year SFT organized a majestic march and a public on Shimla Convention of 1914.

Tsewang Dorji, a visiting fellow of Tibetan Policy Institute, Central Tibetan Administration whose doctorate thesis was on Tibet factor in Sino-Indian Geostrategic Relations and Sonam Gyaltsen, a prominent Tibetan historian & language expert, a professor at Sarah College are the main speakers of the evening talk. They will shed light on the depth of the topic.

Rinzin Choedon also clarifies that a treaty is an emblem of a nation’s independence and every reason to discuss further the detail of the Shimla Convention with the public.

“The hope of independence is vital for Tibetan people to preserve our identity, culture, and religion, thus the hope of a free Tibet must always be preserved. By commemorating Tibetan Independence day- a history that the Chinese government has spent 60 years trying to erase from global consciousness-we are reclaiming our past for future generation while strengthening our struggle so that, His Holiness the Dalai Lama and all Tibetans can one day reunite in a free Tibet.” Said Gyaltsen, Campaigns Director of Students for Free Tibet India.

On this day Tibetans across the globe engage in various activities to raise awareness about Tibet and on different themes to spread the inevitable truth of Tibet's history and independence to the people of the world.