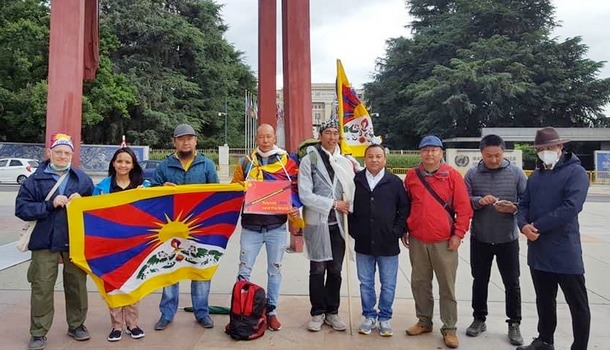 Tsering Wangdue received by the Tibet bureau and Tibetan community in Switzerland, on June 5, 2020. Photo: File

Geneva— A Tibetan man, living in Switzerland, father of two sons, started his solo march from his house in Zurich, on May 27, then walked through Luzern, Bern, Fribourg, and Geneva, it took him nine days and covered around 279 km walking. His peace walk is part of the movement calling for immediate action on China's handling of Coronavirus, which caused catastrophe to the world.

Tsering Wangdue, a Tibetan man started a solo march from Winterthur, crossing several cities to Geneva, Switzerland, appeals to the international community and UNO to take immediate action against China regarding Coronavirus, which created catastrophe to the world and requests the World companies to stop trade with China and boycott Chinese Productions.

The two main missions of his Solo peace march are, to appeal to UNO and WHO to take immediate action against China regarding Coronavirus, which created catastrophe to the world and requests the World companies and all the traders to Boycott Chinese Products.

While he was marching on the way, carrying Tibetan and Switzerland flags with “Make China Accountable” placard, he took short videos to show his peace march situation and where he reached. The hardest experience for him was his foot, as he walked a long way through the villages and cities of Switzerland, his foot got swelling and felt pain, but he said that he will not give up his mission as long as he can walk. On the way, he met many Tibetans, they greeted him with white scarfs and supported him financially and emotionally.

Wangdue reached Geneva on June 5, he was received by the staff of the Tibet Bureau Geneva, Sonam Therchin, and Kalden Tsomo along with Bhayen Trogey, president of Tibetan Community in Geneva accompanied by community’s representatives in front of the UN Office at Geneva.

Wangdue in coordination with the Tibet Bureau Geneva submitted an appeal letter to the UN High Commissioner for Human Rights, Michelle Bachelet. In his two-page appeal letter, Wangdue said “Today we all are suffering because China did not take any action in stopping the coronavirus from spreading in the initial stage. Instead, China punished the doctors and physicians who alerted the people of this virus. Even when the Chinese government got to know the seriousness of this infection, the Chinese government kept lying about the impact and the death toll."

"Now because of the series of lies by China, the world is paying a huge price”. He said Tibetans have been warning the world what China is doing in Tibet can lead to global catastrophe, “Had the world taken serious note of these violations and stopped China in its path of destruction, maybe this current global pandemic could have been avoided and controlled” his letter further reads.

He implored the UN office of Human Rights to make China accountable and called for united efforts to take action against China.

While he was leaving Geneva to Zurich, he said through a video, “I feel glad that my missions fulfilled” and thanked all people who supported him on the ways of a peace march.

On May 26, through a video, he was sharing his plans for a solo march for Free Tibet, he said; “I would like to start a peace march, as the world is in chaos because of COVID-19, which originated from Wuhan, China.” “As being a Tibetan, I have the responsibility to do something for Free Tibet because many Tibetans inside Tibet are suffering. China covetously possesses our land as well as others.” Wangdue said.

He emphasized “ now China is creating enormous catastrophe to the World, therefore we have to do something for it. When I reach Geneva, where the UNO office is, I would like to appeal to the UN to stop treating China as a Country. Therefore, I request all people to stand for Tibet and the World, make China accountable for Human Rights and COVID-19.”