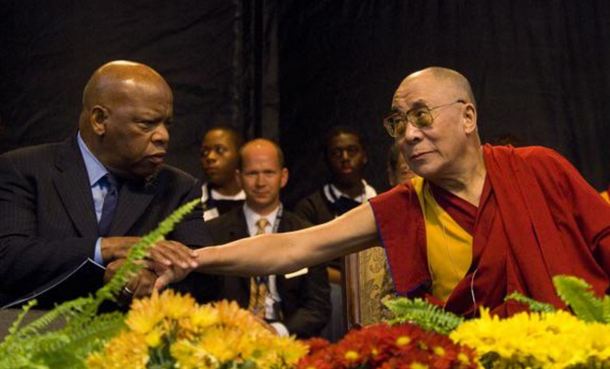 His Holiness the Dalai Lama with Congressman John Lewis, during his visit to USA in 2007. Photo: File

Dharamshala, India — Spiritual leader of Tibet, His Holiness the 14th Dalai Lama has expressed his condolences over the passing of civil-rights icon and longtime congressional Rep. John Lewis (D-Ga.) on July 17 after a six-month battle with pancreatic cancer.

"I am saddened to learn of the passing of Congressman John Lewis. He was not only a leader of the American civil rights movement; his principled commitment to non-violence and justice made him an inspiration and a moral beacon to the world at large," His Holiness the Dalai Lama said in his "Statement on the passing of Congressman John Lewis, USA" issued on July 19, 2020.

"Like millions of people throughout the world I am an admirer of Dr Martin Luther King Jr. Whenever I talk about non-violence, I cite the examples of Mahatma Gandhi, Nelson Mandela and Dr Martin Luther King. Congressman Lewis not only knew Dr King, but also gave him crucial support," His Holiness said.

"Although I did not have the privilege of meeting Dr King myself, in meeting Congressman Lewis, I feel have made a direct connection with him," the spiritual leader of Tibet further added.

"Through his principled adherence to the fundamental democratic values of liberty, equality and justice, Congressman Lewis won admiration even among those who did not share his political outlook," the statement reads.

"In the course of many years of public service, he inspired many Americans to take up the cause of justice and peace through non-violence. Although he is no more, his personal example remains to inspire Americans to make their country and the wider world a better place for everyone," His Holiness concluded with with his prayers.

The third of 10 children in a family of sharecroppers in rural Alabama, John Robert Lewis was born on 21 February 1940. He met Rosa Parks when he was 17 and met Martin Luther King Jr., with whom he went on to become friends, for the first time when he was 18.

Lewis became committed to the civil rights movement while a student at Fisk University in Nashville, where he earned a bachelor’s degree in religion and philosophy. After attending non-violence workshops held by the noted civil rights activists Rev. James Lawson and Rev. Kelly Miller Smith, Lewis became dedicated to the discipline and philosophy of non-violence, which he practiced throughout his life.

Lewis organized sit-ins and many other civil rights activities as part of the Nashville Student Movement, and in the process was arrested and jailed on numerous occasions. He was the last surviving member of the so-called “Big Six”—the leaders of six prominent civil rights organizations that were instrumental in organizing the 1963 March on Washington for Jobs and Freedom during the height of the US Civil Rights Movement—that also included Martin Luther King Jr., James Farmer, Asa Philip Randolph, Roy Wilkins, and Whitney Young.

Lewis is survived by his son, John-Miles Lewis. He was predeceased by his wife, Lillian, who died in 2012. Lewis served in the United States House of Representatives from 1987 until his death on 17 July after a six-month battle with cancer.