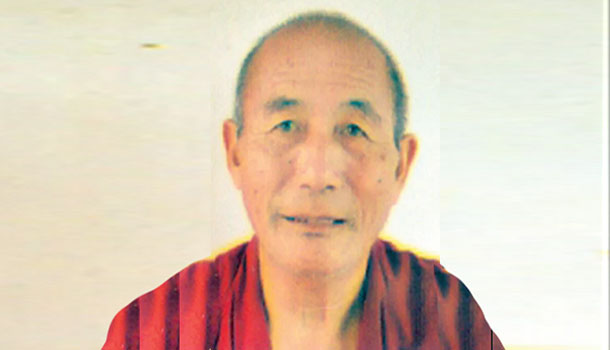 Dharamshala, India — A former Tibetan political prisoner who participated in the 1968 mass uprising in Driru County of eastern Tibet died on July 26, 2020.

A 21-year-old Tibetan monk, Tenzin Choedak was arrested in September 1969 and imprisoned for 12 years following year, after he participated in a mass uprising in Driru country of eastern Tibet in 1968 which was brutally suppressed by the military forces of the Chinese totalitarian communist regime.

From 1966-1976, during the 10 years, over 100,00 Tibetan people to be murdered by the communist authoritarian regime, in one of the most extensive mobilisations of a population, against the people of Tibet. Choedak was one of many political prisoners who witnessed the devastating effects of genocide in Tibet first-hand.

After his release in September 1981, Ven Choedak committed towards revival and preservation of Tibetan Buddhism. He worked tirelessly to revive the monastery in Driru County and others in Lhasa. In 1996, he escaped to exile in India to seek blessings of His Holiness the Dalai Lama and since coming to exile, Ven Choedak dedicated many Buddhist retreat and practices to the long life of the spiritual leader of Tibet.

Choedak was born in 1947 in Driru county, Nagchu, eastern Tibet. He joined the Rabten Monastery at the age of 10 and became an ordained monk. In the following years as the entire Tibet came under the brutal occupation of Tibet, as result over 1.2 million Tibetans died and more than 98 percent monasteries and nunneries were decimated and 99.9 percent monks and nuns were forced to disrobe. Like thousands of Tibetan monks and nuns across Tibet, young Choedak was forced out of the monastery and into hard labor. The genocidal occupation of Tibet coupled with mass murderer Mao’s cultural revolution eventually led to mass uprisings and revolts across Tibet.

Over the past 70 decades, there has been ongoing political repression, social discrimination, economic marginalization, environmental destruction, and cultural assimilation, particularly due to illegal Chinese migration to Tibet which is fueling intense resentment among the people of occupied Tibet.

In 1951, Tibet had to sign the 17-point agreement with China under duress. Despite everything, the provisions of 1951 agreements were violated by the Chinese-authoritarian government, and all the promises made to people of Tibet were denied including regional autonomy, uninterrupted position, and authority of His Holiness the Dalai Lama, promotion of Tibetan language and culture, etc.