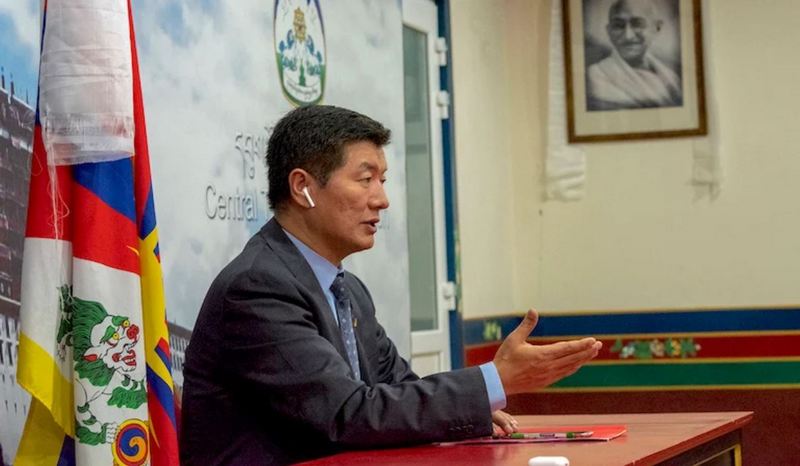 President Xi Jinping, who is also the leader of the ruling Communist Party 'has laid out four key policy directions on Tibet which include combating ‘separatism’ and Sinicizing Tibetan Buddhism, at the 7th Central Symposium on Tibet Works in Beijing on Saturday, 29 August.'

“China’s policy of Sinicizing Tibetan Buddhism is a misguided attempt at controlling the Tibetan people’s religious belief and the reincarnation system. China must draw on its past experiences and allow the Tibetan people to maintain its distinct faith and religious traditions,” said Dr Sangay, President of the Central Tibetan Administration previously known as the Government of Tibet.

“For Tibetans, Buddhism is more important than Communism. To force them to treat communism as more important than their faith is not only a violation of international religious freedom but is also deeply misguided. Sinicization of Tibetan Buddhism is never going to work. The last 60 years of Chinese rule in Tibet is a testament to that fact,” he added.

“The demolition of Larung Gar and Yarchen Gar, two of the largest Buddhist institutes in the world by Chinese authorities was a tragic example of Chinese atrocities on Tibetan Buddhism. Tibetans continue to undergo untold suffering and brutality. Freedom House has listed Tibet as the least free region in the world after Syria for five consecutive years. Yet, the determination of the Tibetan people inside Tibet is still strong and remains faithfully devoted to His Holiness the Dalai Lama.”

Responding to Xi Jinping’s claim of building ‘an impregnable fortress’ in Tibet, Dr Sangay explained that “to foster stability in Tibet, China must first address the genuine grievances of the Tibetan people and not forget the 154 Tibetans who have set themselves on fire in protest against Chinese policies in Tibet.”

“The root cause of instability in Tibet is not the Tibetan people’s faith, but the repressive and failed policies of the Chinese government. The continuation of these hardline policies and repression is only going to make matters worse. That’s why Genuine Autonomy based on the Middle Way Approach is the only viable solution.”

Expressing concern at China’s military build-up on the Tibetan plateau, he raised the issue of China’s military expansionism and its intentions on the ‘five fingers’ as well as on the border regions of Himachal Pradesh and Uttarakhand. “China has been quietly militarizing the Tibetan plateau for over 60 years under the pretext of development and modernization. For Tibet, this has only led to an influx of soldiers, Han settlers, and weapons. For its neighbors, this militarization of the Tibetan plateau has led to a military build-up on its borders, jeopardizing the already contentious border regions as evidenced by the recent Galwan incident.”

“China considers the security and stability of China as dependent on the security and stability of Tibet. Hence the increasing militarization of Tibet is a serious source of concern for the Tibetans as well as India and Asia’s security at large. Restoring the status of Tibet as a zone of peace with its historical demilitarized border with India is the only way of enduring peace in Asia,” Dr Sangay asserted.

In what is being viewed as the most sinister policy move on Tibet, Chinese president Xi Jinping on Saturday introduced four key policy directions to “fully implement the Party’s strategy of governing Tibet in the New Era”. Firstly, he called for efforts to “combating separatist activities” in Tibet and forging “an ironclad shield” to ensure “stability in the region”. Secondly, he pledged to build a “new socialist modern Tibet” that is “united, prosperous, civilised, harmonious and beautiful”.

"Most brazen of all was Xi Jinping’s call for complete sinicization of Tibetan Buddhism aimed at obliterating Tibetan Buddhism from the face of the earth. Speaking to party, government, and military leaders at the CCP’s highest-level meeting on Tibet, Xi demanded that Tibetan Buddhism should be adapted to socialism and “developed in the Chinese context”. Turning the focus onto Tibet border security, Xi also said that safeguarding border security should be a priority and called to “solidify border defences and ensure frontier security”.

It is also noted that 'he 7th Central Symposium on Tibet Works is the CCP’s most important forum for Tibet policies. The two-day meeting was the first such gathering since 2015.'