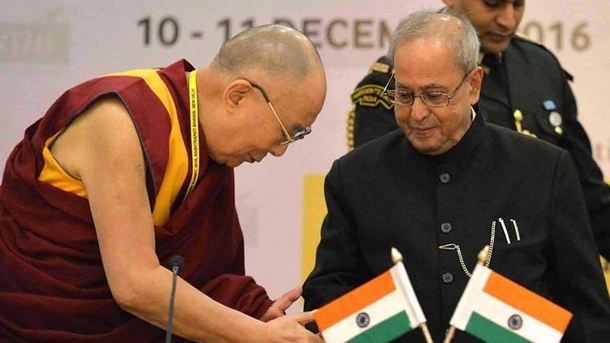 His Holiness the Dalai Lama and President of India Pranab Mukherjee at the Laureates and Leaders for Children Summit at the Rashtrapati Bhavan Cultural Centre in New Delhi, India on December 10, 2016. Photo: File

Dharamshala, India — The spiritual leader of Tibet His Holiness the Dalai Lama, Tibetan President Dr Lobsang Sangay, and parliament Speaker Pema Jungney have expressed condolences at the passing away of former President of India, Pranab Mukherjee. He was 84.

Following the announcement that former President of India, Pranab Mukherjee had died, the spiritual leader of Tibet sent a letter to his son Abhijeet Mukherjee, according to the office of His Holiness the Dalai Lama.

The former President of India Mukherjee passed away in an army hospital in Delhi, 31 August 2020 after suffering septic shock from a lung infection while recovering from brain surgery. He was previously diagnosed with COVID-19.

In his condolence message His Holiness the Dalai Lama said, "I am sorry to learn about your father's passing away. I will remember him in my prayers and would like to offer my condolences to you and your family at this sad time.”

His Holiness recalled having had the honour of meeting Mr Mukherjee on several occasions over the years, most recently in 2016. He noted that Mr Mukherjee’s dedication to public service was consistent over many decades, during which time he held several important ministerial portfolios, ultimately serving as this great nation’s President.

His Holiness concluded, “We can rejoice that for 84 years he led a meaningful life.”

In his message of condolence, President of the Central Tibetan Administration, Dr Lobsang Sangay paid tribute to the former President of India, Pranab Mukherjee as one of India’s most remarkable and well-respected leader across all party lines.

“It is with great sadness that I learnt the demise of the former President of India Sri. Pranab Mukherjee. On behalf of the Tibetan people and the Central Tibetan Administration, I offer our deepest condolences the Government of India, the Indian people, and his family,” Sikyong said in a condolence message.

“One of India’s most remarkable and well-respected leader across all party lines, Sri Pranab Ji has served India with unflinching dedication in various significant positions in his political career that spanned over five decades.”

"In 2016, the former President hosted His Holiness the Dalai Lama at the Rashtrapati Bhawan along with other Nobel Peace Laureates despite strong opposition from the Chinese government,” he added.

“During his tenure as a Defence Minister, India became a Full Dialogue Partner of the Association of Southeast Nations (ASEAN) in 1995. In 2005, once again under his leadership, India signed a crucial 10-year defence partnership with the United States. The recipient of Bharat Ratna, Sri Pranab Ji is known for the economic reforms he ushered during his stint as the Finance Minister.”

“As India mourns the irreparable loss of a colossal leader, our thoughts and prayers are with the people of India and Sir Pranab Ji’s family in this time of grief.”

Speaker Pema Jungney of the Tibetan Parliament-in-exile also offered his deepest condolence to the family members of the former President of India, late Shri Pranab Mukherjee, who passed away at the age of 84 on 31 August 2020.

“On behalf of Tibetans in and outside of Tibet, I would like to offer our deepest condolence to the people of India, the government of India and the family during this difficult time.”

“Lt. Dr. Pranab Mukherjee was the 13th President of India who held various positions in the government during the span of his career. He was an active politician through the decades and one of the country’s most respected politicians. He was one of the most genuine and liberal political leader who was supported equally by both sides of the political spectrum.”

“He was a trustworthy leader and called for trust among the leaders across the political spectrum and was also known to be the consensus builder in the political spectrum. He played a key role in India’s growth story and evolution through the decades. We laud his legacy and it shall always inspire us all.”

“In 2016, despite the strong opposition by the government of China, Lt. Dr. Pranab Mukherjee hosted His Holiness the 14th Dalai Lama to the Laureates and Leaders for Children Summit which was held at the Rashtrapati Bhavan in New Delhi.”

“In July 2017, our delegation led by the Deputy Speaker had the privilege to meet you and you assured your support towards our cause for which we are very thankful. Once again, kindly accept our heartfelt condolence to you and your family at this difficult time.”