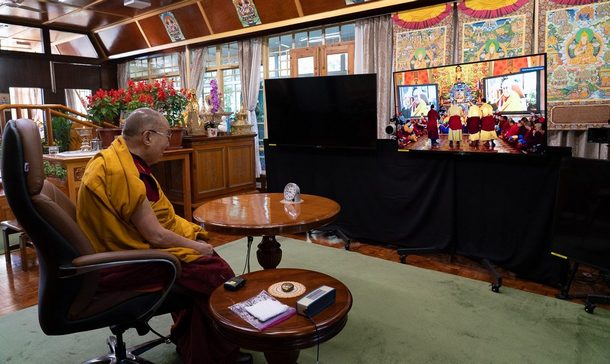 His Holiness at his residence in Dharamsala, HP, India on October 15, 2020. Photo by Ven Tenzin Jamphel

Dharamshala, India — The spiritual leader of Tibet, His Holiness the Dalai Lama has congratulated Jacinda Ardern for being re-elected as New Zealand’s Prime Minister for a second term in a landslide election victory.

Immediately on receiving news of her party’s resounding victory in the New Zealand general election, His Holiness the Dalai Lama wrote to Prime Minister Jacinda Ardern to offer her his congratulations.

“I admire the courage, wisdom, and leadership you have shown in these challenging times,” he wrote. “I particularly applaud the way you have responded with calm, compassion, and respect for others in the face of tragedy.

“During my several visits to your beautiful country over the years, I have been deeply touched by the openness and warmth of people from all walks of life. I have been encouraged by the enthusiasm and interest they have shown in my efforts to promote a sense of oneness of humanity and the need for inter-religious harmony.

His Holiness concluded by wishing Ardern every success in meeting whatever challenges may lie ahead in fulfilling the hopes and aspirations of the people of New Zealand.

Ardern on Saturday delivered the biggest election victory for her center-left Labour Party in half a century. Her new majority in parliament will allow her to form the first single-party government since New Zealand adopted a proportional voting system in 1996.