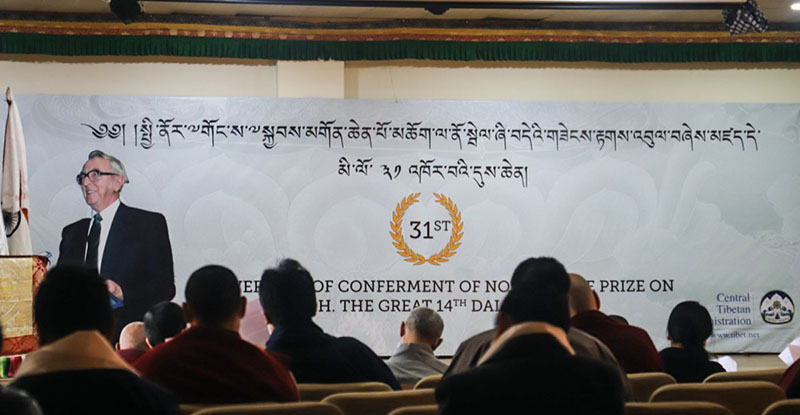 A minimum physical presence of Tibetan dignitaries from Central Tibetan Administration (CTA) attend the occasion that marks the Nobel Peace Prize day of the Tibetan religious head as well as Human Rights Day at the press conference in Sikyong Hall. Ven Karma Gelek reminds audiences about the endless contributions His Holiness the Dalai Lama made in order to create a more compassionate and peaceful world. Tibet has garnered international support as the Tibetan spiritual leader continues to promote religious harmony and nonviolent means in quest for free Tibet, he explained.

The Kalon also reminds the Chinese Government to consider the sentiments and aspirations of Tibetans inside Tibet for practicing basic Human Rights. Many Tibetan artists are imprisoned for exposing the repressive policies imposed in occupied Tibet. The deteriorating Human Rights situations in Tibet haven’t improved one bit even as the world celebrates Human Rights Day, he points out. Imprisonment of Tibetan artists across Tibet for simply exercising their freedom of expression and speech is one way for the Communist China to break the spirit of freedom in Tibet, he stated while reading Kashag’s statement.

The Department of Health awards six Tibetan health workers for their more than 25 years of service, on the occasion to show appreciation for their dedication in betterment of the Tibetan community.

Shri Ajit Kumar Nehria , president of Indo-Tibet Friendship Association (ITFA) in Dharamshala also addresses the occasion. He paid his wishes on the conferment of the Nobel Peace Prize to His Holiness the Dalai Lama. The Tibetan spiritual leader has made Dharamshala his second home, he says and that people of Dharmshala are extremely honoured. He further affirmed ITFA’s strong support for the freedom of Tibet and promises to continue to do so in the future.