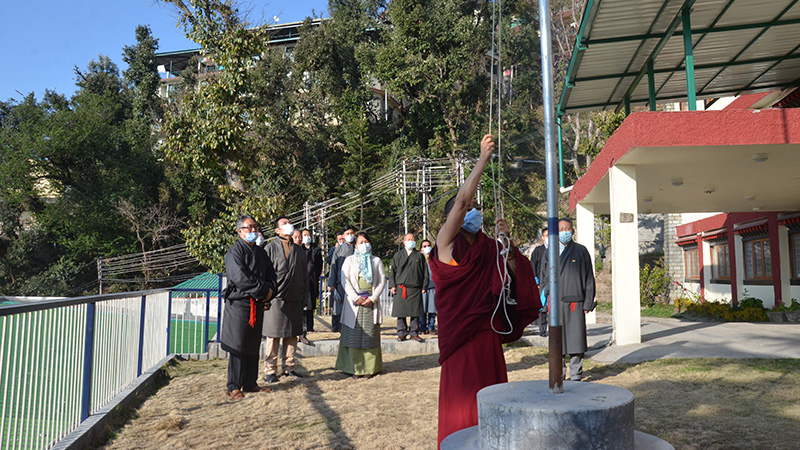 Dharamshala, India – The Central Tibetan Administration (CTA) held a ceremony to commemorate the 72nd anniversary of Republic Day of India. “The government of India and the people of India have been extremely kind and considerate to the cause of Tibet for more than 60 years. We express our heartfelt gratitude to the people and government of India", said Ven Karma Gelek Yuthok, Minister for the Department of Religion and Culture at the ceremony.

The primary figure in the ceremony was Ven Karma Gelek Yuthok, Minister for the Department of Religion and Culture. He greeted the crowd in attendance and hoisted the Indian Flag, while the Indian National Anthem was played in the background. When being questioned about the event and its significance, he firstly congratulated the government and the people of India. He also underlined India’s achievement towards being a Republic country.

“On behalf of the Tibetan people inside and outside Tibet, I would like to congratulate and extend our warmest greetings to the government and people of India on its 72nd Republic Day. It is a great achievement for a large populous country like India to go on the path of the Republic and to be relatively very successful so far, and in that regard, India sets a great example for the rest of the world,” he said.

The minister also went on to convey appreciation towards India, for its generosity and consistent support in Tibet’s fight for freedom. “The government of India and the people of India have been extremely kind and considerate to the cause of Tibet for more than 60 years. We are very thankful, and we express our heartfelt gratitude to the people and government of India. We wish for India to achieve further success in the coming decades and to increasingly develop upon its republic and democratic system,” he addressed.

Upon being asked about China and the people of Tibet, he defined China being neither a democratic nor a republic nation. “Although they say it is the People’s Republic of China, I don’t think it’s a republic, as the minimum condition for being a republic is that the power should be with the people. And representatives of people should be the ones running the country. Since there are no elected representatives in the Republic of China, I doubt whether it is a true republic and it is also far from being a democratic country,” he asserted.

The Minister for the Department of Religion and Culture ended with the hope of a righteous outcome for the people of Tibet. “Since the whole world is on the path of being Republic and Democratic, we do hope that it is also a matter of time for the Republic of China to follow the true republic and democratic systems. With that, we hope these systems and principles also prevail in our land of Tibet and that the people get to enjoy the rights these systems provide,” he concluded.