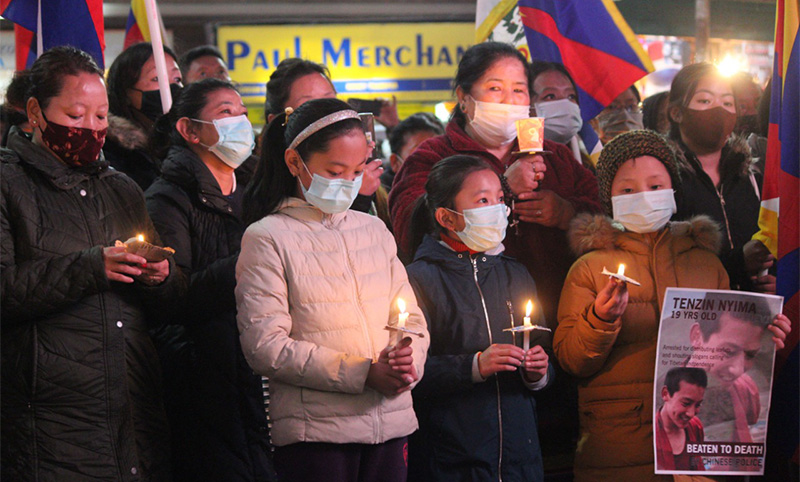 Dharamshala, India – “China should be held accountable for their brutality and oppression in Tibet,” said Rinzen Choedon, National Director of Students for a Free Tibet-India while addressing the plight of Tibetan people inside Tibet under China’s repressive rule.

Tibetan Youth Congress (TYC) along with Tibetan Women’s Association (TWA), and Students for a Free Tibet (SFT)-India organized a candlelight vigil for Shurmo and Tenzin Nyima at McLeod Ganj Main Square on January 26, 2021. These two young Tibetans died untimely under the brutal regime of Communist China.

Rinzen Choedon started her speech by thanking everyone for coming and being part of the candle light vigil and for showing their solidarity and support. “It pains me immensely to share the news of the brutal murder of Tenzin Nyima, a 19-year-old monk. He was beaten to death by the Chinese police because of his beliefs. His crime was that he stood out and believed in independence and freedom of Tibet. This is one of the examples to show the systematic torture and totalitarian oppression of the Chinese government against Tibetan people. The young and peaceful monk was seen as a threat because he called for freedom,” she stated.

“It was a peaceful, nonviolent demonstration outside the police station. A new generation like Tenzin Nyima who has never witnessed or seen independent Tibet and yet demanded for freedom shows the courage, resilience, and grit of the younger generation. For years, the Chinese have tried to exterminate our identities, culture and beliefs. Tenzin, along with six fellow Tibetans had been unfairly and unjustly sentenced to five years of imprisonment. At the time of this decision, one of them was just 15 years old,” she further added while mentioning how the younger generation have a strong belief and faith in the idea of independent Tibet. Their determination and courage are enough to show that come what may, the Chinese cannot break their spirits.

“Protest by Tenzin and other Tibetans clarifies the ongoing critical situation inside Tibet. The Tibetan people are forced to please China’s communist leaders and at the same time forced to acknowledge their so-called ‘poverty alleviation policy’. I also want to highlight the self-immolation of Shurmo (26) that came out after five long years. Think of these young people as your family members and you would find yourself getting emotional. The fact that we got to know about the death of Shurmo after five years reaffirms the severity of censorship and surveillance inside Tibet. The courage and determination of these young people resonates what the Tibetans are feeling at present times,” said the National Director of SFT-India. She mentioned how important it is for people to look at the adversities faced by Tibetans everyday inside their own homes.

She concluded her speech by reminding everyone that they should never forget the sacrifices of their fellow Tibetan brothers and sisters and to remember what these people stood for. “We must continue to fight for Tibet and it is high time for the international communities to stand with Tibetan people and hold Chinese authoritarian regime accountable for their brutality and oppression.”