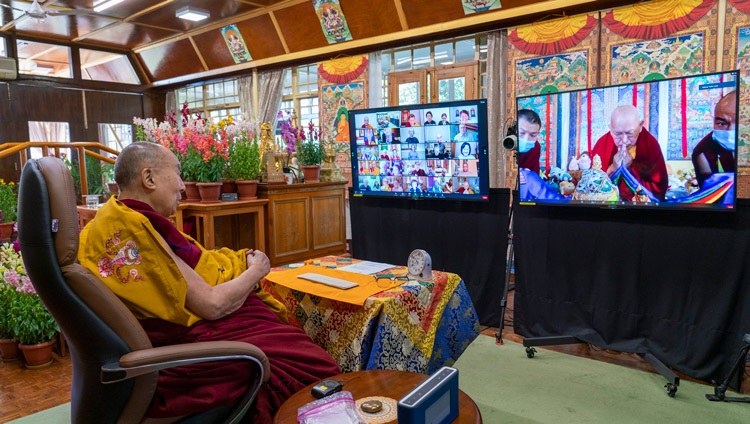 Lama Zopa Rinpoche thanking His Holiness the Dalai Lama at the conclusion of his online teaching from his residence in Dharamsala, HP, India on February 8, 2021. Photo: Ven Tenzin Jamphe

Dharamshala, India – “The root of our Karma and mental afflictions is ignorance,” said His Holiness the 14th Dalai Lama while giving a teaching on Jangkya Rolpai Dorje's Recognizing the Mother – a song of experience of the Madhyamaka View. The virtual teaching session was held on February 8, 2021, on a special request by Lama Zopa Rinpoche and the Foundation for the Preservation of the Mahayana Tradition (FPMT).

As the session commenced, His Holiness the Dalai Lama explained the verses sentence by sentence. “The ‘view’ here refers to the dependent’s origination or dependent’s arising and promoting the ethical practice of not harming others. These are all related to the world at large because ethics like non-violence has to do with world peace,” he explained the topic.

“The first verse Buddha uttered after attaining enlightenment seems to have captured what he was going to teach later – the three turning of the Dharma wheel,” His Holiness stated. He also mentioned about the identification of the four noble truths by Buddha, explaining the concept of suffering or dukha. “Suffering must be known, origin must be eliminated, cessation must be actualised and the path must be cultivated. To overcome suffering, we must get rid of its origin which comprises Karma and mental afflictions,” he continued.

The sixth chapter of Chandrakirti’s Madhyamakavatara - the text elucidates that ignorance permeates other mental afflictions, similar to the way in which physical faculty permeates all other faculties. “Chandrakirti demonstrates reason and logic because merely resorting to scriptures may not give you a reason to gain conviction. The Bodhisattva wings of wisdom and compassion, flying across the samsara will help you reach Buddhahood, crossing all defilements and afflictions,” he further added.

“Verse 34 – 36 of the sixth chapter puts forth four logical absurdities, that are set against those who assert that things have some self-categorized existence. Things are merely designated by their names and labels, they do not have any intrinsic inherent existence,” His Holiness said by drawing similarities with quantum physics. “You need to reflect on the teachings after listening to them,” he observed.

As the Losar or Tibetan New Year is approaching, the Tibetan spiritual leader affirmed that he has been able to do more for Tibetans while living in exile than while living in Tibet. Followed by the teaching, there was a quick Question and answer session. Dochen Bloom, a youngster from Vermont put forward a question on behalf of all the youngsters.

“How to deal with feelings of isolation and loneliness due to the pandemic?” he asked. “It’s true that people haven’t been able to gather in large groups due to the pandemic, but it’s all related to health. However, thanks to the pandemic, youngsters like you can stay focused, read books and listen to teachings. It would be good if you can do that,” His Holiness the 14th Dalai Lama responded.

“Buddhism is considered to be very precious by scientists and scholars,” said Lama Zopa Rinpoche. He wished for the long life of His Holiness the Dalai Lama. The session concluded with His Holiness appreciating Lama Rinpoche’s good work and asking him to continue the efforts.