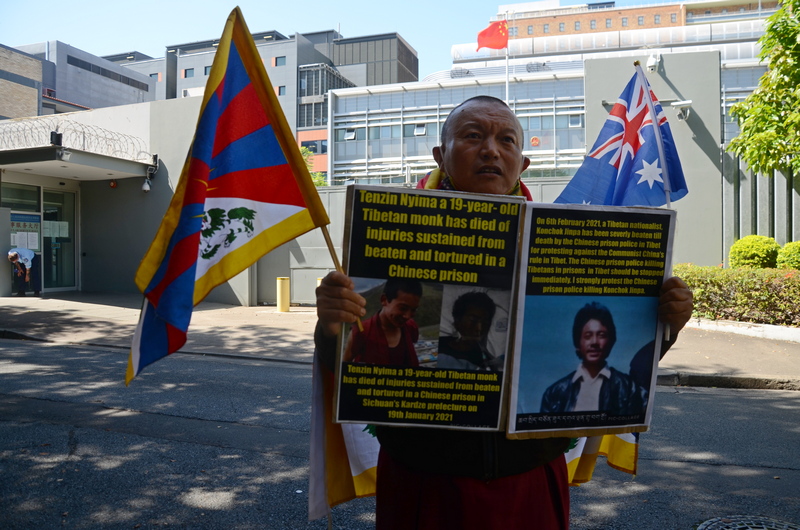 Bagdro had tears in his eyes as he started the protest peacefully in front of the Consulate General of the People's Republic of China in Sydney on Friday, February 26, 2021, at 11 am. The purpose of his protest to show solidarity with Tenzin Nyima and Kunchok Jinpa, two Tibetan political prisoners who died recently due to the torture and hardship they endured while serving their prison term in Chinese prisons in Tibet.

Tenzin Nyima, a 19-year-old Tibetan monk from Dza Wonpo has died on 19 January, after being severely beaten and tortured by the Chinese authorities for peaceful independence protests in November 2019. He was initially detained along with three other monks Kunsal, 20, Soetra 18, and Tsultrim, 18 two days after hundreds of hand-written leaflets calling for independence for Tibet were found scattered outside a local government office on November 7, 2019.

Kunchok Jinpa, a 51-year-old from Driru county in Tibet had vanished in Chinese custody after being arrested on November 8, 2013. Jinpa died on February 6, 2021, three months after being admitted to a hospital suffering from paralysis and a brain hemorrhage.

"The Chinese regime is an outlaw regime and the Chinese expansionist mindset has become dangerous to the world. Through this solidarity protest, I also honor those who have paid the ultimate sacrifice for the freedom of Tibet and Human Rights for Tibetans, I wish to bring this into the light," Bagdro told TPI.

"Tibetans living in Australia, a peace-loving nation, not only enjoy a fair-go, but we also have other important opportunities, including the freedom to speak up for freedom and human rights in Tibet on behalf of our people who are suffering under the Chinese authoritarian regime," he further said, adding: "We also must not forget these great opportunities, to maintain the strength of our movement for Tibet."

The former Tibetan political prisoner is the author of 'Tibetan Spirit Cannot Be Crushed’, a pictorial book. He would like to donate one to the Campbelltown City Library.