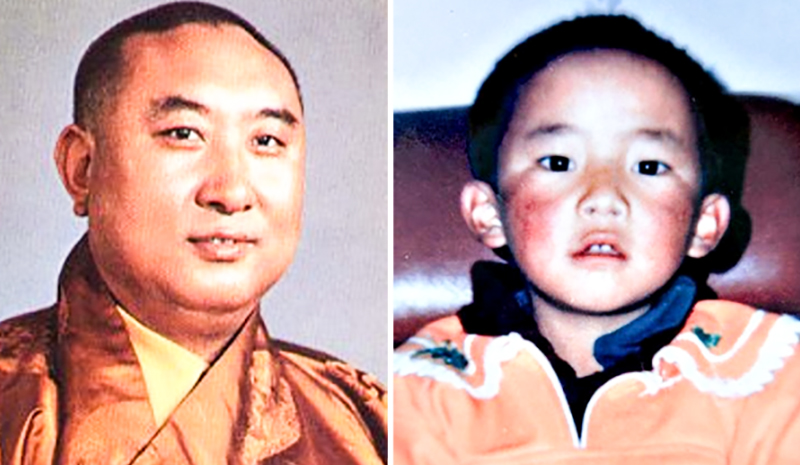 Dharamshala, India — “The absolute wish of all the Tibetan people is for the 11th Panchen Lama to be freed from the oppression of the government of China, to be able to see and hear him. We call on world leaders to assist in his release,” said the Tibetan Parliament-in-Exile on Monday to mark on the 26th Anniversary of the Enforced Disappearance of the youngest prisoner in the world.

On the 26th Anniversary of the enforced disappearance of the 11th Panchen Lama, Gedhun Choekyi Nyima. Tibetan Parliament-in-Exile appeals to international communities, governments, and non-government, human rights groups to help free the Panchen Lama from the Chinese government.

“On the 17th of May 1995, the communist Chinese government effectuated the disappearance of the 11th Panchen Lama Gedhun Choekyi Nyima, along with his parents and attendants, with the result that 26 years have passed without any news on their whereabouts. The Tibetan Parliament in Exile, being gravely concerned about this continuing tragic situation, wishes to make this urgent appeal to the community of impartial governments, parliaments, and non-governmental bodies across the world,” they said.

“Successive reincarnations of His Holiness the Dalai Lama and of the Panchen Lama have been the protectors and refuge of the Snowland of Tibet. They have been like the duo of its sun and moon respectively and have had a profound oath-bound bond of teacher and disciple with each other throughout their successive rebirths. And they have had a role in the process for the recognition of each other’s reincarnations too. In such and other ways, they have shouldered all their temporal and spiritual roles in togetherness. For hundreds of years, these two leaders have been the head ornaments of the entirety of the Tibetan people until the time their whole national territory came under the armed occupation rule of communist China,” they explained.

“After communist China invaded and took control of the entire territory of Tibet, His Holiness the Great 14th Dalai Lama took refuge in India to become an exile. Since then he has continuously been engaged in efforts of unimaginable magnitude to preserve and protect the religious, political, and ethnic identity of Tibet. His Holiness has been conferred an enormous number of recognitions and awards that included the globally prestigious award Nobel Peace Prize. He constantly and still puts enormous efforts in the betterment of all sentient beings of this world carried out in keeping with four avowed commitments of his life,” said in their statement.

“The 10th Panchen Lama had while remaining under the dictatorial control of the communist Chinese government, written a seventy-thousand-character petition to the Chinese leadership. He outlined in the petition how under the implementation of the communist Chinese government’s policies of violent repression and utter heartlessness, Tibetans people, their religion and culture, as well as their ancestral land and its resources were being totally destroyed with the use of force of unimaginable atrocities. He presented the petition to the Premier of the People’s Republic of China. Following this action, the communist Chinese government branded the 10th Panchen Lama as a counter-revolutionary and subjected him to a class struggle persecution. For more than nine years, the late 10th Panchen Lama endured untold travail of suffering while he remained imprisoned. Following his eventual release, the Panchen Lama travelled across the three traditional provinces of Tibet and set out to revive a number of important religious festivals of Tibet such as the Great Prayer Festival of Lhasa. He also set out to undertake the task of reviving or rejuvenating the religious and cultural traditions of Tibet, its language, the natural environment, its rich diversity of flora and fauna, and the wellbeing of all the sentient beings on the land. It was while he was at the height of being very busily engaged in such enormous noble efforts of great implications that a tragic news came mentioning his sudden demise on the 28th of January in 1989,” the statement reads.

“And then, in keeping with the prayers received from the people concerned with the Tashi Lhunpo Monastery’s administration and in accordance with the historically established tradition on the recognition of the reincarnations of each other, His Holiness the 14th Dalai Lama proclaimed Gedhun Choekyi Nyima as the 11th Panchen Lama on 14th May 1995. Gedhun Choekyi Nyima was given Jetsun Tenzin Gedhun Yeshe Trinley Phuntsok Pal-sangpo as his religious name by his Holiness the Dalai Lama at a ceremony especially held for the purpose. Following this worldwide proclamation, Tibetans in and outside Tibet offered their deepest devotion and obeisance to Gedhun Choekyi Nyima as the 11th Panchen Lama of Tibet. However, after three days on the 17th of May 1995, the communist government of China forcibly took away the young reincarnate lama, his parents, and Chadrel Rinpoche, the head of the group that led to the recognition of the reincarnate Panchen Lama. Twenty-six years have passed since their disappearance. For political expediency, the Chinese government introduced a boy named Gyaltsen Norbu, claiming that he was the 11th Panchen Lama and they named him Panchen Erdini Choekyi Gyalpo. Ever since they have been using him to satisfy their political needs. Nevertheless, the general masses of the Tibetan people who are devotees of the successive reincarnations of the Panchen Lama neither revere nor show devotion to him, and they certainly do not recognize him,” the Tibetan Parliament declared.

Throughout the disappearance of Gedhun Choekyi Nyima, the true reincarnation of the 10th Panchen Lama for over 26 years, numerous governments and parliaments as well as a number of human rights groups across the world, took upon his case with an unbroken series of actions on his behalf. They published reports on him, made direct requests to the government of China, and took part in campaigns and other forms of activities on his behalf as and when they were carried out. While the participations are too numerous to be mentioned here, we wish to extend our gratitude to all those who participated in those movements. And once again, we wish to reiterate the following important points in our appeal:

1) Even though the developments in modern science and technology in this world today have reached a stage today that almost any event that takes place on this globe, and any situation in it could certainly be pinpointed. It has now been 26 years that nothing could be learnt about the whereabouts of the 11th Panchen Lama, a divine being in human manifestation. It may be that either the communist Chinese government has excelled in the art of subterfuge to an extent to be able to maintain the secrecy or they may have already ensured that the 11th Panchen Lama is, in fact, not alive anymore. There seems to be no room for any other conclusion. We, therefore appeal to you to assist us with efforts to get credible information that would show whether or not the 11th Panchen Lama is alive today.

2) The fact that the Panchen Rinpoche has remained disappeared for the last 26 years is more like an unprecedented historical event and deserves to be recorded in the history of this world. We, therefore appeal to you to make efforts to make this a reality.

3) It is a fact that the Tibetan people living in and outside Tibet recognizes and have reverence only to the 11th Panchen Lama Gedhun Choekyi Nyima recognized by His Holiness the 14th Dalai Lama, not to Gyaltsen Norbu who has been appointed to this position by the communist Chinese government out of political expediency. We request you to make this point clear to the government of communist China in all your meetings with its leaders and officials.

5) The absolute wish of all the Tibetan people is for the 11th Panchen Lama to be freed from the oppression of the government of China, to be able to see and hear him, and, on that basis, to be able to usher him to the golden throne at Tashi Lhunpo Monastery, the seat occupied by all the previous successive Panchen Lama reincarnations. We appeal to you to be unrelenting in extending patronage to us in terms of helping us to realize this auspicious rise of the era of sunshine in our life at the earliest possible moment.