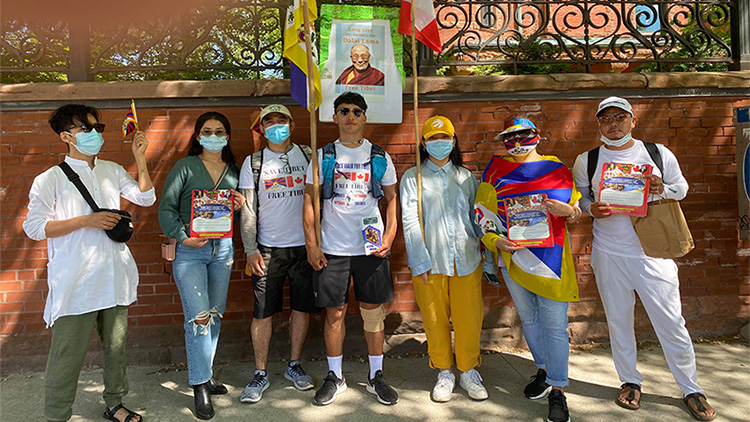 Dharamshala, India — A Tibetan activist started a peace march from the Chinese consulate in Toronto to the Chinese embassy in Ottawa, Canada, calling for China to be held accountable for Covid-19 and boycott of the 2022 Olympics in China.

“This year marks 62 years since China illegally invaded Tibet in 1959. Since then, Tibet has remained one of the most repressed and least free regions in the world. Washington based research institute Freedom House has ranked Tibet as the second least free country in the world for the fifth year in a row,” reads the brochure.

“The PRC's return to totalitarian ideology in recent years has led to even more control over Tibet with a sharp increase in the arbitrary arrest, detention, and torture of human rights defenders and activists. Peaceful dissent of any kind and degree is met with harsh penalties. Tibetans and Uyghurs suspected of criminal offenses, particularly those about political matters, are almost always denied the right to fair trial or hearing,” he said.

“157 Tibetans have self-immolated in Tibet since on February 27, 2009. When Tapey, a young monk from Kirti Monastery, set himself on fire in the marketplace in Ngawa City, Ngawa City, Sichuan,” it explained.

“I campaign for an end to China’s occupation of Tibet and for international recognition of Tibetans’ right to freedom,” said Sangyal.

Sangyal is a Tibetan activist and he won Mister of Tibet Canada in 2016. He began a peaceful protest at the Chinese consulate in Toronto every Wednesday since 2018, to demand the release of all Tibetan political prisoners in Tibet, as well as raising awareness about the Tibet issue, including the lack of fundamental rights and human rights in Tibet, why Tibet is an occupied nation, and why His Holiness the Dalai Lama is in exile.

1) To support the return of His Holiness the Dalai Lama to Tibet.

2) To renew the Sino-Tibet dialogue in good faith.

3) To release Panchen Lama and other political prisoners in Tibet.

5) To hold China accountable for covid-19.