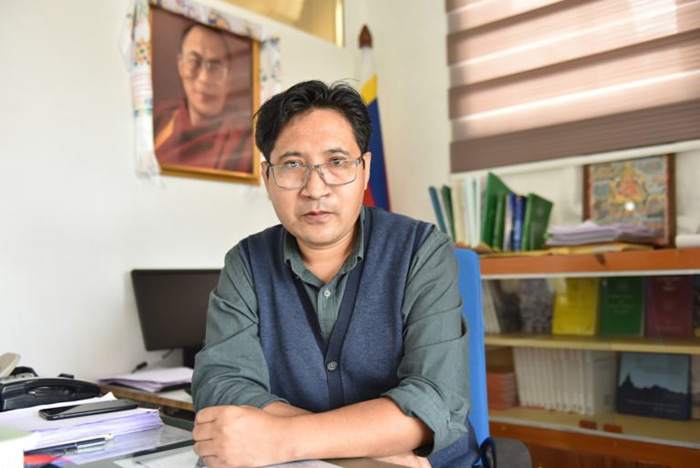 Dharamshala, India – "The last one hundred years has been a century of disaster and manmade suffering for China. It wrought havoc in the lives of its people especially the minority nationalities such as the Tibetans, Uyghurs, and Mongolians that China has forcefully occupied," said the Secretary of the Department of Information and International Relations (DIIR), while discussing the Chinese government's atrocities over the past century on the occasion of the 100th anniversary of the founding of the Communist Party of China.

"It is my honor to be a part of this virtual cross-movement solidarity discussion being organized by the World Uyghur Congress in light of the 100th anniversary of the founding of the Communist Party of China (CPC). And the title for today’s discussion is aptly put as ‘Nothing to Celebrate, A Century of Oppression’," Secretary Karma Choeying started.

"The Communist Party of China or the Government of the People’s Republic of China is celebrating the 100th founding anniversary of CPC with much fanfare and a sense of achievement. However, the fact of the matter is that there is hardly anything to celebrate for anyone including the common Chinese people. In contrast to the official Chinese government’s claims of achievement and prosperity, the last one hundred years have been a century of disaster and manmade suffering for China. It wrought havoc in the lives of its people especially the minority nationalities such as the Tibetans, Uyghurs, and Mongolians that China has forcefully occupied," the statement reads.

"Since coming into power in 1949, the CPC under Mao launched a series of disastrous campaigns such as the Great Leap Forward and the Cultural Revolution. The Great Leap Forward triggered a massive famine in China, and 35 – 40 million people starved to death as a direct result. The Cultural Revolution set off a spree of irreparable destruction to China’s cultural institutions and knowledge centers. The madness and destruction caused by these two campaigns in China are unparalleled in the history of mankind. Following the death of Mao and the culmination of the Cultural Revolution, Deng Xiaoping ushered economic liberalization in China. Despite its rapid economic growth, China continued to remain a one-party state where everything is controlled by the Communist party. This was evidenced by the brutal murder of hundreds of Chinese students who have marched on Tiananmen Square in Beijing on 4 June to demand democratic reforms. The suppression of individual freedom and rights still continues unabated in China," explained the Secretary.

"The situation in China’s occupied territories such as Tibet and East Turkestan has hardly improved since their occupation. China has continued to implement failed policies in these areas that don’t reflect the genuine aspirations of the people. In 1951, China forced a Tibetan delegation to sign a 17-point agreement that marked its 70th anniversary this year. Since the illegal occupation of Tibet in 1949, the Tibetan people have seen unimaginable destruction and atrocities. As a direct result of the Chinese invasion and occupation of Tibet, over 1.2 million Tibetans died between 1949 and 1979. Over 6000 Tibetan monasteries were destroyed and 99% of Tibetan monks and nuns were forced to disrobe. The Tibetan language was rendered to the background while Mandarin was imposed on Tibetan students in schools and in the workplace. Unable to bear these unjust policies, the Tibetan people have frequently revolted to express their frustrations against the Chinese government, most notably in 1989 and in 2008. However, these pan-Tibet uprisings were quelled with extreme violence and swiftness," the statement clarified.

"After decades of living under such atrocity and repression, there arose a mild hope of political reform when Xi Jinping ascended to the post of Chinese President in 2013. However, since coming into power, Xi has only strengthened his hold on power and amplified the repressive policies implemented in Tibet. He has also reinvigorated the Chinese government’s efforts to Sinicize all non-Han cultures and languages as part of his ‘China Dream’, the latest version of China’s nation-building project. As a result, the efforts to sinicize non-Han nationalities have accelerated under Xi Jinping. In East Turkestan for instance, millions of Uyghurs have been detained in self-styled internment camps in a campaign to ‘de-radicalize’ them. Despite global condemnation and satellite footage of such camps, China has denied the existence of any such camps and has instead claimed that they are providing free education and vocational training to the Uyghurs. Their Uyghur identity is also treated as a threat to Chinese national sovereignty," said Secretary Choeying.

"Similarly, Tibetan language and culture have come under intense pressure to sinicize under President Xi. In the last Tibet Work Forum held in 2020, Xi Jinping called for reinvigorating efforts to sincize Tibetan Buddhism. China has also enhanced its efforts to interfere in the age-old Tibetan reincarnation system ostensibly to manipulate the next incarnation of the Dalai Lama. In an effort to weaken the influence of Tibetan spiritual leaders, China has also constantly vilified His Holiness the Dalai Lama and other spiritual leaders. It has forced Tibetans to put up pictures of Chinese communist leaders in their homes and personal spaces. In schools and workplaces, the use of Mandarin has been strictly enforced as part of China’s new language policy. At least 155 Tibetans have set themselves on fire in protest against these repressive policies of the Chinese government in Tibet," the statement asserted. "Due to such ungrounded fears, minority nationality places like Tibet and East Turkestan are now under intense electronic surveillance and censorship. With the rapid development of technology, China’s surveillance and censorship tactics have been so outrageously successful that China is now able to control what ordinary people across Tibet and East Turkestan see on their phones, read in books or newspapers, or discuss in classrooms at universities, or pray inside their homes or temples. These repressive policies were also a result of a fear within China’s policymakers that China could disintegrate along ethnic lines like the erstwhile Soviet Union. Hence, efforts to ‘Sinicise’ ethnic groups have gathered steam. However, despite its repressive policies and assimilatory nation-building projects, Tibet and East Turkestan remain simmering points within the Chinese nation, given the ‘core-periphery’ relationship that has developed," the DIIR Secretary declared.

"As the Communist Party of China marks its 100th founding anniversary on 1 July this year, China has now become an economic and military superpower. Due to its economic heft, the world has become heavily dependent on it. However, in comparison to its strength and size, it seems to be lacking the genuine trust and confidence of the international community. Rampant human rights violations, rising aggressive nationalism (wolf warrior diplomacy), assertiveness vis-à-vis territorial disputes, crackdowns on nongovernmental organizations, censorship of domestic and international media, and political repression remains as a knot of tension between China and its relationship with the rest of the world. Being one of the most populous nations with a foundation of rich cultural civilization, and now one of the foremost economic superpowers of the world, the Chinese leadership needs to seriously revisit its hardline and unrealistic posture and be a responsible leader of the world," concluded the statement.