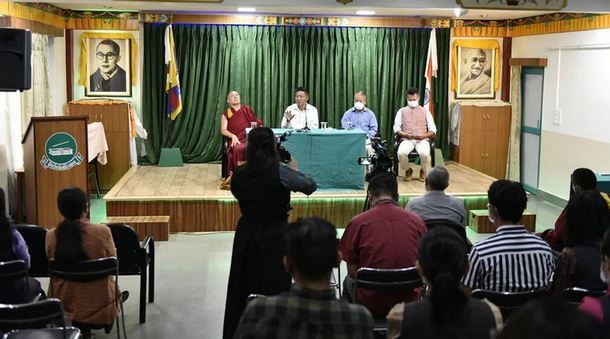 Dharamshala, India — "Political concerns of Tibet often assume priority, whereas the preservation of religion and culture cannot be separated from the national cause of Tibet," said Penpa Tsering, President of the Central Tibetan Administration (CTA).

The remarks were made during a visit to the Library of Tibetan Works and Archives in Dharamshala, India, on Thursday 5 August 2021. The President, accompanied by Kashag Secretary Tsegyal Chukya Dranyi, was welcomed by Library Director Ven Geshe Lhakdor and General Secretary Ngawang Yeshi, as well as the staff.

In his address, President Tsering noted that he had been visiting various departments and autonomous bodies of the CTA for the past two months. He also expressed his appreciation for the efforts and achievements of the Library, whose patrons include His Holiness the Dalai Lama and Professor Samdhong Rinpoche.

In highlighting the important role the agency plays in cultural preservation, Sikyong has explained that "while political concerns in Tibet often assume official priority, the preservation of religion and culture is inseparable from the Tibetan national cause."

President Tsering further emphasised 'the necessity to use all resources optimally as aid grants require accountability', as stated on the CTA's official website.

He also spoke about the key priorities and strategies of the 16th Kashag, including "ongoing digitisation projects" and other upcoming initiatives such as "the CTA's 2021 census and the Kashag's broader efforts to restore Sino-Tibetan dialogue".

While congratulating the President on his successful election victory and wishing him every success in his endeavours of Kashag ", Ven Lhakdor also shared his hopes that the "Kashag would render assistance in aid to promote the institution’s dedicated efforts".