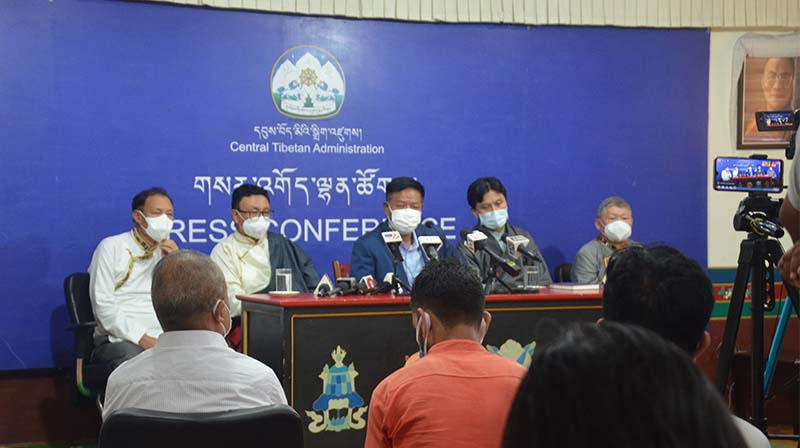 Dharamshala, India — “Around 91.19% of the total eligible Tibetan population in India have been vaccinated,” said Sikyong Penpa Tsering of Central Tibetan Administration(CTA), while describing the measures taken by the administration to prevent the spread of the disease.

Sikyong Penpa Tsering held a press conference on August 7, 2021, to inform the public about the current status of COVID-19 in India and the measures taken by the new administration at the Lhakpa Tsering Memorial Hall, the Department of Information and International Relations (DIIR), CTA.

This press conference focuses on three key issues: Vaccination, supply of equipment, and livelihood support for the Tibetan communities in India and Nepal.

Palden Dhondup, Chair of Task Force Committee reported in detail on the initiatives and measures taken by the Commission and Department of Health in combating the covid19 since the outbreak in the Tibetan community. He also reported on the distribution of Sorig immune booster at a cost of Rs 78 Lakhs and described the routine testing activities carried out in the Tibetan inhabited areas in India.

Additionally, the Tibetan Government-in-exile has received immense support from monastic institutions, non-government organizations, and individual donors as an aid during the COVID-19 crisis.

“Today, we have vaccinated 91.19% of the total eligible Tibetan population in India, of which 38.2% have been fully vaccinated and 52.67% have received their first dose,” Sikyong further explained.

“In Nepal, around 36.32 % of the Tibetan population in Nepal have been provided with the shot,” added the president of CTA.

The second priority highlighted by the Sikyong is to provide equipment to those suffering from COVID-19. “So far, this has been very successful and no shortages of supply have been reported,” he said.

The third priority was to provide livelihood support for those who were affected by the pandemic. A sum of 3 crore Rupees was laid out for this purpose. He also mentioned that some members of the task force committee will visit communities with the inability to access the vaccine.

"Right now, we are in the process of preparing for the third wave of covid-19. Some people say it is already on. We have been allocated necessary equipment to several Tibetan settlements to stock equipment for when it arrives," Sikyong Tsering explained, speaking about their next plan of action.

Secretary Jigme Namgyal Namgyalkhang informed that a total of Rs 8.5 lakhs in covid-19 relief was distributed to schools and monasteries for the purchase of personal protective equipment, oxygen concentrators, and to facilitate hybrid learning during the Covid-19 era.

Tashi Tsering, Director of the Tibetan Medical and Astrological Institute (TMAI), described the Institute's efforts and initiatives, including the distribution of Sorig immune boosters to vulnerable populations and the provision of free treatment for covid-19 patients.

The press conference was followed by a question and answer session during which issues regarding preparedness, vaccination drives, and funds were addressed.