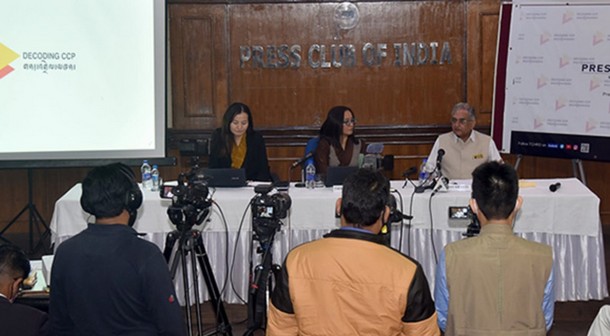 New Delhi, India — Tibetan Center for Human Rights and Democracy (TCHRD) launched a new website, named "Decoding the Communist Party of China" (CCP), on December 2, 2021, at the Press Club of India in Delhi to "define the real meaning behind the Chinese government's propaganda words and slogans".

“The new Decoding Chinese Communist Party (CCP) website is an online guide unpacking Chinese propaganda power words and slogans, at a time when the world discovers an urgent need to figure China out”, claims TCHRD in a statement.

“In order to identify China's motives and intentions, a team of Tibetan researchers created 'Decoding CCP', because Tibetans have unique insights into their more powerful neighbor - often their lives depend upon close and critical readings of China's official jargon," the statement reads.

Tsering Dorje of Decoding CCP said that "China takes itself so seriously, which is a bit comical. There is a deep history implanted in China's claim to be the exemplary civilisation everyone must bow to. Tibetans know the backstory well, and navigate their stateless place in the world, through unpacking those slogans. This is a key that unlocks inner meanings, to help anyone hoping to gauge where we are all heading. Join us for a deep dive into the authoritarian mind."

"As China codifies its agenda for a new order, with distinctly Chinese characteristics, and as propaganda slogans are issued with greater frequency, we need reliable guidance that unpacks and decodes the proliferating building blocks of discourse power. This matters globally. For instance, the China model is actively exported to developing countries worldwide, especially in government-to-government transactions that bypass civil society and community engagement, on the explicit basis of China's doctrine of 'non-interference" said TCHRD Director Tsering Tsomo.