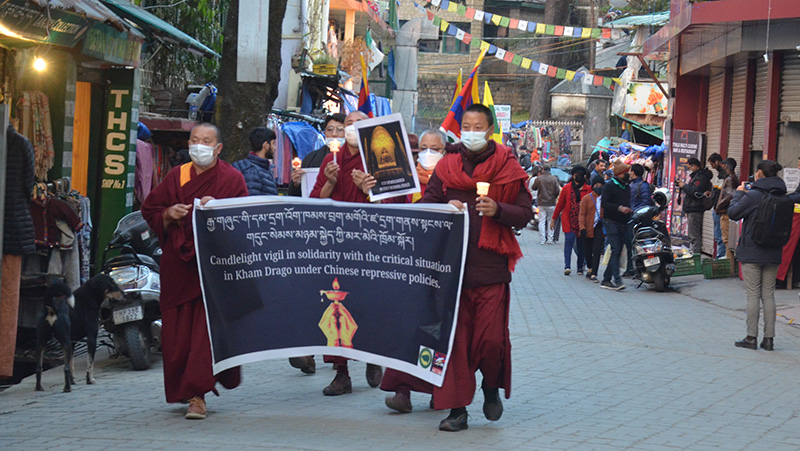 On December 28, 2021, Tibetan Youth Congress(TYC) and Students for a Free Tibet(SFT) held a candlelight vigil in Dharamshala to call for an end to China's repressive policies in Draggo County. Members of the Tibetan community and activists marched in large numbers, carrying candles and Tibetan flags, as well as placards reading "Tibetans want freedom from Xi Jinping's bloody rule," "Communists end destruction now," and "End China's occupation of Tibet."

Recently, the Chinese government demolished a 99-foot statue of Buddha and destroyed 45 huge prayer wheels that were erected near a monastery in Drago county. The statue was demolished just six years after it was built.

The monks and lay communities of Draggo county,  had jointly spent over 40,000,000 Yuan on the statue to prevent the danger of war, natural disasters, and other catastrophes. The giant statue of the Buddha was legally erected on May 5, 2015, with authorizing documents in order from the district office.

However, on December 12, 2021, the Chinese government ordered its demolition and destroyed the statue along with the 45 prayer wheels in the vicinity of Draggo Monastery. Authorities also took down and burnt the Mani prayer flags.

Last month, the Chinese government also demolished the Draggo Monastery's Gaden Namgyal Monastic school, which served as an important hub of education in the region. The school consisted of about fifty rooms of varying sizes and accommodated over 100 students. The curriculum included Buddhism, general Tibetan language studies, English, Chinese, and a few more.

“China’s continuous disregard and desecration of the religion of the Tibetan people, their culture and their custom, as well as its policy of sinicization, has caused the assault on all the Tibetan national identity, most notably their language, religion, and culture,” said an official statement from the TYC and SFT.

Further, the Chinese government has accelerated policies that reduce Tibetans as a proportion of the population and undermine their cultural and religious identity in 2020. The implementation of the ‘2019-2020 Farmer and Pastoralist Training and Labor Transfer Action Plan’ has forced tens of thousands of additional Tibetan farmers and nomads to give up their land rights, become wage laborers, and move to urban areas where they are crowded into large apartment blocks.

Tibetans participating in the vigil called on the Chinese Communist Party to end its occupation and destruction of Tibet. They also called on world leaders to hold China accountable for its increasing human rights violations and repressive practices against Tibetans in Tibet. They strongly condemned China's severe restrictions on fundamental human freedoms, arbitrary arrests, incommunicado detention, torture, and unnatural deaths not only in Tibet but also in East Turkestan and Southern Mongolia.

“The CCP crackdown against freedom, democracy, and human rights has intensified beyond belief and international governments must come together to take strong, joint, immediate action to send a clear message to China and boycott the Beijing winter Olympic 2022 games which only attempts to 'sport wash the most heinous of human right abuses,” the statement further added.

Several peaceful protests have been organised across the world to boycott the 2022 Winter Olympics to be held in Beijing, China. The international community must hold China accountable for its ongoing human rights violations in Tibet.