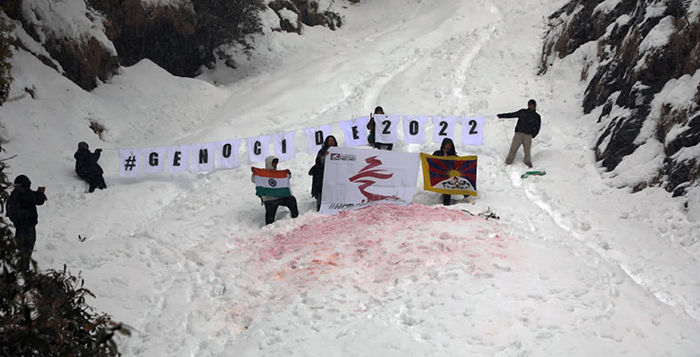 Tibetan activists from SFT-India hold a protest in the snow on the high mountain of Dhauladhar in Dharamshala on January 28, 2022, with a message "GENOCIDE 2022". Photo: SFT

Dharamshala, India - Tibetan activists from Students for a Free Tibet hold a protest in a snowy area of Dhauladhar Mountain in Dharamshala on January 28, 2022, calling for a boycott of the Beijing 2022 Winter Olympics.

Their protest took place a week before the start of the games in Beijing and they urged people around the world not to watch the bloody games hosted by the totalitarian regime that has committed systematic or widespread human rights violations and crimes against humanity, including genocide, torture, political violence, massacres, arrests and concentration camps.

The Tibetan activists, standing in the deep snow, wave the national flags of India and Tibet and hold large banners with the message "GENOCIDE 2022" - Beijing 2022 Olympic Games and urge the world not to watch the bloody games.

“Today we are marking the one-week countdown to the Beijing Olympics genocide. Since the Beijing Summer Olympics in 2008, we have witnessed human rights abuses in Tibet under the Chinese regime, the extensive evidence of the suppression and oppression of human rights defenders, the use of excessive force against peaceful protesters, women's rights activists, and even lawyers,” said Tenzin Passang, the Program Coordinator of Students For a Free Tibet-India.

“In Hong Kong, freedom and democracy are completely dismantled, there is genocide against the Uighurs, Tibetans are completely cut off from the outside world, with all this evidence, we urge you not to participate in these Beijing Winter Olympics and we urge you to take up the challenge, that is, I will watch the Genocide Games, I will not watch these bloody Games, stay on the right side of history, no Beijing Olympics,” she added.

“Given the clear evidence of the Chinese CCP's systematic use of torture and suppression of human rights defenders, including mass detentions, torture, sexual abuse and persecution of Tibetans, Uighurs and other Turkish Muslims, it is not right for you to attend any part of the Beijing 2022 Olympic Games,” the activists said.

Protests against the Beijing 2022 Winter Olympics are taking place in many places, including the US, Canada, the UK, Belgium, France, Switzerland, Austria, New Zealand, and Australia.

The #NoBeijing2022 movement has been going on for months in opposition to the IOC's decision to allow Beijing to host the Olympic Games again. It has received support from major governments, including the US, UK, Australia, Canada, Japan, Lithuania, Belgium, Denmark, and Estonia, who have decided to launch a diplomatic boycott of the Beijing Games. The Winter Olympics are scheduled to begin on February 4 and end on February 20, 2022.