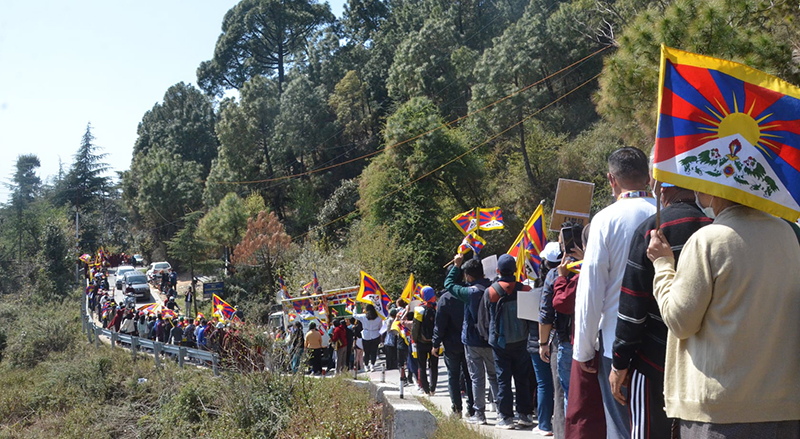 Tibetans marching from Mcleod Ganj to Kacheri in Dharamshala, on March 10, 2022. Photo: TPI

Dharamshala, India — Tibetans and Tibet supporters marched from Mcleod Ganj to Kacheri in Dharamshala, to commemorate the 63rd anniversary of the Tibetan National Uprising on March 10, 2022. They call on China to end the torture and genocide in Tibet.

Tibetans and Tibet supporters from around the world gathered in different cities, including Dharamshala, Delhi, Sydney, Bern, Taipei, Paris, Hague, London on March 10 to commemorate the 63rd anniversary of the Tibetan National Uprising. They called on China to end the tortures and genocide in Tibet, the illegal occupation of Tibet, and demand human rights for Tibetans inside  the Tibet.

"Today marks the 63rd anniversary of the Tibetan National Uprising day. It was on this day when, following China’s occupation of Tibet and posing a grave danger to His Holiness’ life, Tibetans from the three traditional regions of Tibet Do Toe, Do Mey, Ü-Tsang, rose up to demonstrate against the occupation. Tibetans around the world commemorate this significant and historical day. We, the five major Tibetan NGO here in India, would like to pay our homage and express our gratitude to all the martyrs who sacrificed themselves for Tibet. We stand in solidarity with those who continue to suffer the atrocities committed by the brutal Chinese Communist regime," stated the statement of five Tibetan NGOs.

"Since the invasion, the Chinese communist party has implemented policies aimed to repress and exterminate the Tibetan identity, religion and culture. Basic human rights are trampled upon. Yet Tibetans in Tibet have been steadfast in their resistance against the occupation. In 2008, Tibetans from all three traditional regions of Tibet took to the streets calling for an end to China's occupation of Tibet and the return of His Holiness the 14th Dalai Lama. Recently, a 25-years old, young Tibetan named Tsewang Norbu succumbed to his injuries after setting himself on fire in front of the Potala Palace in Lhasa, Tibet. 158th Tibetans have set themselves on fire so far to protest against China," they said.

“Instead of making sincere efforts to resolve the Sino-Tibet conflict, leaders of the Chinese Communist Party have employed deception and lies. Let alone bringing any changes to the policies, Tibetans in Tibet are randomly arrested and oppressed - they are deprived of their freedom of speech, religion and practiced upon ethnic discriminative policies. For instance, many Tibetans are arrested for sharing their views on the Sino-Tibet conflict on social media or simply sharing pictures of His Holiness the Dalai Lama. It has been 27 years since the disappearance of Gedhun Choekyi Nyima, the youngest world political prisoner, the 11th Panchen Lama, and his parents. In the last few years, more than 7000 monks and nuns were forced to leave Yachen Gar, the biggest center for Buddhist studies in Tibet,” they said.

“In recent years, China’s policy of Sinicisation has intensified impacting Tibetan national identity, most notably the language, religion, culture and environment. In 2020, the Chinese government has accelerated policies that reduce Tibetans to a minority, and undermine their cultural and religious identity,” Tibetan NGOs stated.

“The People's Republic of China (PRC) claims that Tibet is an integral part of China when in fact Tibet has always been an independent nation until China’s illegal occupation of Tibet in 1959. Yet China continues to fabricate lies to justify the occupation. Human rights defenders in the world have even contested their claim and rejected the propaganda,” they explained. “With the grace and tireless efforts of His Holiness the 14th Dalai lama, the courage of Tibetan people and dedication of supporters around the world have kept the Tibet movement strong and alive. We urge Tibetans everywhere to keep striving to strengthen our freedom movement,” the NGOs said.

“We pay our respect and thank all the world leaders, governments, parliamentarians, non-governmental organizations, and individuals who have in the past and continue to support the Tibet cause. We especially thank the government of India and its people for their generosity and support,” the statement concluded.