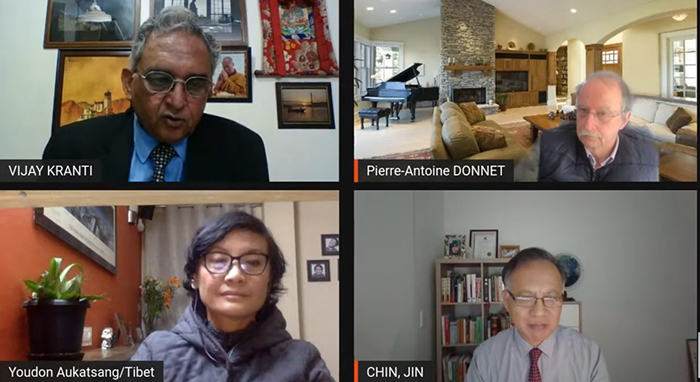 New Delhi — Experts in an international webinar on Tibet expressed concern over the consistently deteriorating human rights situation inside Tibet under Chinese rule. Their common concern was that the world community, especially world governments, has failed in its responsibility to ensure that the basic human rights of Tibetan people are preserved and respected.

This webinar was jointly organised by the Centre for Himalayan Asia Studies and Engagement (CHASE) and the Tibetan Youth Congress (TYC) from New Delhi to mark the 63rd Anniversary of the Tibetan people's uprising against China's Colonial Occupation. It was on 10th March in 1959 when Tibetan people stood up against Chinese colonial rule over their country. The uprising was crushed by China’s People’s Liberation Army with a heavy hand and Tibetan ruler and the supreme spiritual leader Dalai Lama was forced to escape to India for refuge.

The discussion panel comprised of PIERRE ANTOINE DONNET, author, China expert, and a former correspondent at the Beijing news bureau of French news agency Agence France-Presse (AFP); Dr CHIN JIN, author and a senior leader of the Chinese democracy movement and; Youdon Aukatsang, Member of Tibetan Parliament in Exile as three main speakers. The webinar was moderated by Vijay Kranti, a senior journalist, Tibetologist, and Chairman of CHASE.

Mr Pierre Antoine Donnet who was posted in Beijing from 1984 to 1989 said that his interest in Tibet had started in his childhood as a reader of the famous comic book ‘Tintin In Tibet.’ Sharing his experience of his first visit to Tibet as an AFP correspondent in Beijing in 1985, he said that the Chinese authorities had warned him in advance that he was being taken to Tibet only on the condition that he would not write about what he sees inside Tibet. “But I was so moved by the stories of suffering by those Tibetan monks who had served in Chinese prison, that I wrote all that in my news report on my return to Beijing. Following this the Chinese government banned my future visits to Tibet,” said Donnet. He later wrote two books, one on Tibet and one on China. His first book on Tibet is Tibet Dead or Alive (1990) and the latest book is China the Great Predator (2021).

“It might not be wrong to say that the economic expansion of China partly came at the cost of Tibet's suffering. While China was open to the world for economic benefits, it closed Tibet off from the support and scrutiny of the world community. The situation has become bad to the point that those who could manage to leave their homeland to take refuge in other countries cannot contact their families in Tibet without inviting suffering to them at the hands of Chinese authorities,” he said.

Dr Chin Jin is a well-known personality among the democracy-supporting community of the Chinese Diaspora. Currently, he lives in Sydney in Australia. In his presentation, he said that he was shocked to see the indifference of western media about its reporting on China and Tibet. He pointed out that the self-immolation by a Tibetan musician in Lhasa last month was the 158th known case in recent years. But the western media and governments have adopted an indifferent attitude towards China’s acts in Tibet. Claiming that the desire for democracy inside China today is quite strong, he regretted that the Chinese democratic movement inside and outside China lacks a charismatic leader like Dalai Lama. Commenting on the ongoing Ukraine-Russia war, he regretted that US President Joe Biden’s and other western leaders’ indifference towards Ukraine is going to make China more adamant and powerful.

Chin Jin pointed out that the 13th Dalai Lama issued a proclamation, which clearly negated any form of subordinate relation of Tibet to China. But Tibet missed the opportunity to be internationally recognised as an independent sovereign state, due to the self-isolation policy of its leaders during the 1912-1950 era. Commenting upon the internal situation inside today’s China, during the question-answer session Chin Jin said, “Now the only chance for the Chinese people to be relieved of the Chinese Communist Party (CCP) is that this Party breaks up due to internal problems and infightings and meets its end. It is only when CCP is demolished and loses power in China, that countries like Tibet and Xinjiang etc can hope of freedom and independence.”

Youdon Aukatsang, a prominent Tibetan woman leader and a four-time elected member of Parliament in Exile, said that there had been no legal grounds for China’s claim over Tibet. History has proved over and over again that the so-called ‘liberation of Tibet’ by the Chinese Army is nothing but a veil to cover its colonial occupation of Tibet.

Speaking about conditions inside Tibet, she said that in seven decades of Chinese rule over Tibet no Tibetan was ever appointed as the Party Secretary of CCP in Tibet. “Absence of Tibetans in the decision-making system of today’s Tibet only proves that Tibet is treated as a colony by the Chinese masters of Tibet,” she said. “Indiscriminate exploitation of Tibet’s mineral resources and water resources by China is not only hurting the ecology of Tibet but also of countries around Tibet,” she added.

Commenting on the Chinese government’s policy about reincarnations tradition of Tibet she said, “no one in the world, especially the Tibetan people, is going to accept China’s imposition of the next Dalai Lama. Even if they decide to appoint one, their candidate will face the same sad fate as met by their Panchen Lama whom Tibetan people have refused to accept despite all efforts and pressure of Chinese government.”

Vijay Kranti, Chairman of CHASE and moderator of the webinar pointed out to Beijing government’s assertion and bullying of the world community to accept that Tibet has been always a part of China in history and that any comment on Tibet would be treated as interference in China’s internal affairs. Referring to historic facts he said, “before the establishment of China as the ‘Republic of China’ in 1912, China remained a vassal of foreign Mongol and Manchu rulers for 784 years and the last time, when it existed as a ‘Chinese’ country was 268 years ago in 1644”. In comparison, Tibet was a free country throughout history.

Kranti poked at China’s claims that Tibet is part of China because the Mongols had ruled over Tibet and China. “This claim is as absurd as if India today claims that Australia is a part of India or New Zealand claims that India is its inseparable parts simply because all their countries were colonies of the British at some stage in the history,” he said.

Commenting on world governments’ tendency to accept Chinese claims over Tibet and Xinjiang, Kranti said that, “no international law permits any country to certify or endorse the occupation by any other country over a third country. So, if any government tends to accept Tibet as a ‘part of China’ or refrains from pointing out the sad human rights situation inside Tibet in the belief that Tibet is an ‘internal matter of China’, then that government too is acting as an accomplice in China’s crime of colonialism.”

Dr Aayushi Ketkar of the Special Centre for National Security Studies at Jawahar Lal Nehru University handled the question-answer session. Yeshi Choemphel, Cultural Secretary of TYC presented the vote of thanks as co-organizer of the webinar.