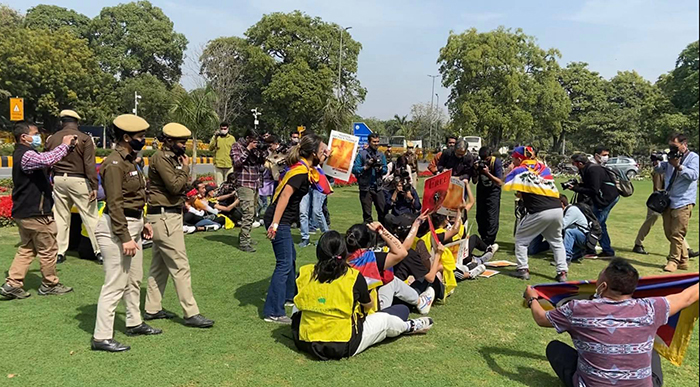 More than 70 Tibetan youths protest in front of the Chinese Embassy in Delhi, on the occasion of the 63rd Tibetan Uprising Day, March 10, 2022. Photo: TYC

New Delhi — More than 70 Tibetan youths protested in front of the Chinese Embassy in New Delhi, to mark the 63rd anniversary of the Tibetan National Uprising Day, as well as to protest against the illegal occupation of Tibet by Chinese government in 1959.

On March 10, 2022, Tibetan Youth Congress (TYC) organised a protest in front of the Chinese Embassy in New Delhi, in which more than 70 Tibetans from Delhi participated, to mark the 63rd anniversary of the Tibetan National Uprising Day. All the activists were detained at Mandir Marg police station in Delhi and released in the same evening.

On March 10, 2022, Tibetans and Tibet supporters from around the world gathered in cities such as Dharamshala, Delhi, Bangalore, Sydney, Bern, Taipei, Paris, Hague, London, Brussels, New York, and Toronto to commemorate the 63rd anniversary of the Tibetan National Uprising with peaceful demonstrations and marches.

“Since the forceful invasion of Tibet in 1949, Tibetans from all walks of life have fought relentlessly but Tibet was brutally occupied by 1959. On this day of 10th March 1959, Tibetans from all three traditional regions rose to the defence of their historically defined sovereignty and a national leader with indomitable courage and spirit of self-sacrifice, culminating in the famous Tibetan Uprising of 10th March 1959 with three famous slogans, "May His Holiness the Dalai Lama live for thousands of years!", "Tibet is an independent country!" and "China, get out of Tibet!",” a statement of TYC stated.

“Since then, Communist China deprived the Tibetan people of their basic rights and freedom and was subjected to strict surveillance. Because of such oppressive policies, Tibetans inside Tibet have resorted to measures like self-immolation to protest against China's illegal occupation of Tibet. Till now, 168 Tibetans have set themselves on fire. On 25th February 2022, a 25 years old Tibetan artist, Tsewang Norbu set himself on fire in front of the Potala Palace in Lhasa to protest against China,” they said.

“Recently, when China hosted the 2022 Beijing Winter Olympics, heavy restrictions were imposed on Tibetans inside Tibet and showcased thousands of Chinese propaganda posters and paintings inside Tibet. Moreover, Tibetan Schools were shut down, there were bans on large religious gatherings, Nomads were resettled from their traditional homelands, and Statues of Buddha and Guru were destroyed. A renowned writer, Go Sherab Gyatso was arbitrarily imprisoned for 10 years for writing about Tibet. In short, the Chinese Communist Party has made living life like Hell in Tibet. Despite all these Gross Human Rights Violations in Tibet, Uyghurs, Taiwan, Hong Kong, and Southern Mongolia, the International Olympic Committee has turned a blind eye and let China host the 2022 Bejing Winter Olympics,” it added.

“Today, on this occasion, Tibetan Youth Congress condemn Chinese Communist Party’s repressive regime in Tibet and reaffirm our commitment to resist China and continue our fight for the independence of Tibet,” TYC members said.

“We would also like to extend heartfelt appreciation to all the individuals and organisations, who continue to contribute to the cause of Tibet in various ways during this difficult time. We also urge Tibetans living in exile and inside Tibet to remain united and steadfast in our struggle against the single opponent and ultimate goal. We must stand, speak and take responsibility for our movement,” the statement concluded.