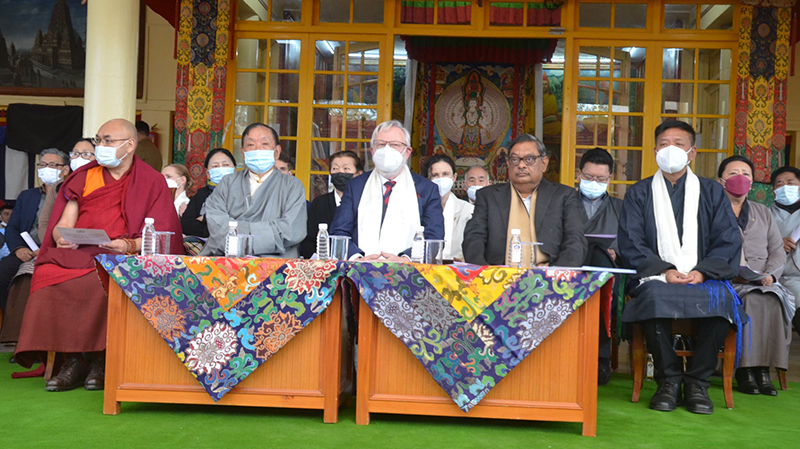 Dharamshala, India — Major cities around the world joined the central Tibetan administration in commemorating the 63rd Tibetan National Uprising Day and paying tribute to Tibetan martyrs who sacrificed their lives for the cause of Tibet since 1959, to rise up against the illegal occupation of Tibet by China.

The official event of the 63rd National Tibetan Uprising Day was marked at the Tsuglagkhang Complex, Mcleod Ganj, Dharamshala, in the presence of Jiri Oberfalzer, Vice President of the Czech Senate as chief guest and Amarendra Dhari Singh, Member of the Rajya Sabha, as special guest. Penpa Tsering, Sikyong of the Central Tibetan Administration (CTA) and Khenpo Sonam Tenphel, Speaker of the Tibetan Parliament in Exile, as well as other senior officials, including parliamentarians, CTA ministers and secretaries, representatives of various non-governmental organisations and Tibet supporters attended the anniversary.

After the official commemoration, thousands of Tibetans and Tibet supporters marched from Mcleod Ganj to Kacheri in Dharamshala, a distance of 10 km, while chanting and shouting slogans for a free Tibet. The rally called on China to end the illegal invasion of Tibet, respect international law and human rights, and end the decades-long torture and genocide in occupied Tibet.

On that day, thousands of Tibetans and Tibet supporters from around the world assembled in major cities such as Washington DC, New Delhi, Canberra, Sydney, Bern, Tokyo, Taipei, Paris, The Hague, London, Brussels, New York and Toronto to commemorate the National Tibetan Uprising Day with peaceful demonstrations and marches. This year, the rallies expressed solidarity with the people of Ukraine who are facing the same illegal invasion and have become another victim of the modern expansionist totalitarian regime like China.

“Today, our greatest concern is the ongoing systematic Sinicization of the new generation of Tibetans in Tibet. In 2011, some policy advisors of the Chinese Communist Party called for the abrogation of the national regional autonomy system and adoption of the so-called “Second Generation of Ethnic Policies” to weaken the identities of the 56 nationalities and strengthen a single Chinese national identity. They called for the revocation of the preferential policies for the ethnic minorities, encourage ethnic assimilation, enforce the use of the Chinese language, and closure of schools for nationalities. These measures are now being actually implemented in Tibet,” said Sikyong while delivering the Kashag statement on March 10, 2022.

“If the Chinese government wishes to win the Tibetan people’s love and loyalty for the People’s Republic of China, it should end its suppression of Tibetans’ human rights and annihilation of the Tibetan identity by respecting its own constitution. It should accept the historical fact of Tibetans and Chinese having lived as neighbours with harmony and mutual help. It must cease thoughts and actions which give rise to enmity between Tibetans and Chinese, and instead pay attention to the aspirations of the Tibetans,” he continues.

“The Central Tibetan Administration hopes to find a mutually-agreeable solution to Tibet’s future status through dialogue based on the Middle-Way Approach, and particularly, by urging the Chinese government to correct its wrong policies. We are ready to engage in discussion to seek a lasting solution based on equality, friendship, and mutual benefit,” the Sikyong of CTA said.

“Until the Sino-Tibetan conflict is resolved, as the free spokespersons of our brethren in Tibet, we will make every effort to use result-oriented means to bring the ongoing Chinese government’s repression and extermination of Tibetan identity to the attention of world’s parliaments, governments, think tanks and the media through the voluntary Tibetan advocacy campaign and other means,” he added.

“In December 2021, the government of China began to carry out a series of religious and related destructions in Drakgo County in the traditional Tibetan province of Kham. They included a 99-feet statue of the Buddha built at the Gaden Rabgyal Namgyal Ling Monastery, an imposing statue of the Maitreya Buddha, prayer wheels each containing a hundred million rounds of the text of the six-syllable Tibetan Buddhist mantra for the invocation of the Avalokiteshvara bodhisattva, and a monastic school. And then again, just recently, the government of China demolished at the Chanang Monastery belonging to the Nyingma tradition of Tibetan Buddhism, also located in Drakgo County, a three-storey high statue of the Padmasambhava Buddhist master. During the destruction carried out at the Drakgo Monastery, abbot Paga and many other Tibetan people were arrested or kept under detention in other ways. By such actions, the government of China not only severely curtailed the religious freedom of many Tibetan people but also implemented in Tibet what amounted to a revival of the brutalities of the Cultural Revolution movement in China,” said Speaker of the Tibetan Parliament in-Exile (TPiE) while delivering the statement of TPiE.

“On the 26h of October in 2020, China’s public security personnel arrested and took away in Chengdu City eminent Tibetan writer Go Sherab Gyatso. And for more than one year, there was no information on the whereabouts of this scholar-monk. Later in February 2021, a Chinese court in Tibet’s capital Lhasa tried and sentenced him for having allegedly engaged in a separatist activity to a jail term of 10 years. His health condition remains precarious today as he already had a lung ailment at the time of his arrest and this has been worsened by poor conditions in jail as well as due to the beatings he was subjected to in prison. Likewise, there has been no word whatsoever from the government of China on the whereabouts and the condition of the 11th Panchen Lama Gedhun Choekyi Nyima Rinpoche ever since it kidnapped this totally innocent person more than 25 years ago. Along with them, the government of China should release as soon as possible all Tibetans it has imprisoned thus far for political reasons. Together with the United Nations Organisation, and the Tibetan Parliament in-Exile also calls upon human rights organisations, governmental bodies, and non-governmental organisations across the world to take a serious interest in the situation of political prisoners, the human rights situation, and the state of religious freedom of the people in Tibet, East Turkestan, and Inner Mongolia as they continue to suffer persecution under the repressive rule of the government of China by raising questions and holding discussions with its leadership. The purpose should be to make efforts to encourage the government of China to relax and liberalize its hardline policy on them,” he continues.

“The plateau territory of Tibet was a fully independent country from any characteristic point of view – its history, territoriality, ethnicity, culture, linguistic heritage, customs and traditions, and so forth. Nevertheless, it has been under the rule of an expansionist China for over seventy years now. However, the world is dynamic and many changes have been keeping on taking place across it all the time. Eventually, this trend of continuing change is bound to reach Tibet too. This is the basis on which we take the opportunity provided by this occasion to again reiterate our call on the leadership of the government of China to enter into a substantive dialogue on the basis of the mutually beneficial Middle Way Policy which is in keeping with the desire of His Holiness the Dalai Lama and which has also been adopted by the Tibetan parliament in Exile,” the Speaker said.

Special Guest Amarendra Dhari Singh addressed the gathering and said, "China should not be allowed to get away with saying this is an internal matter, it is a matter of national security. A strong signal must be sent to China that India stands in solidarity with the Tibetans in Tibet and the diaspora.”

“China should not be allowed to get away with saying this is an internal matter, it is a matter of our national security, it is a matter of our commitment to human rights, which is our ethos. A strong signal has to be sent to China that India stands shoulder to shoulder with the Tibetans in occupied Tibet and in diaspora,” said MP Amarendra Dhari Singh. He further assured India’s support for Tibetans to practise Tibetan religion and culture.

Chief guest Jiri Oberfalzer addressed the anniversary event and said, "In the Czech Republic, we have experienced the totalitarian communist system for many decades, we can understand others who have faced the same history and unfortunately until today."

"I always say: if there is only one oppressed nation, one subjugated country in the world, no state can be completely safe, no one can be sure of his own freedom," he added.