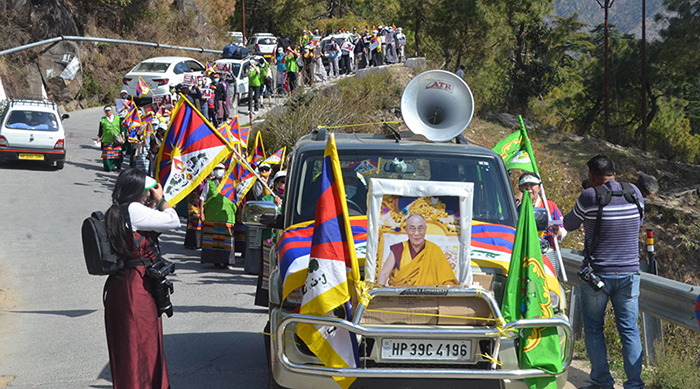 Dharamshala, India — “It is high time for the leaders of the free world to stop China with its atrocities, take appropriate measures against the Chinese Human rights violation and call for appropriate action against the Chinese government until they are genuinely committed to resolving the issue in Tibet,” said Tibetan Women’s Association on March 12, 2022.

On March 12, 2022, the Central and Regional Tibetan Women's Association (TWA) organised an event to commemorate the 63rd anniversary of Tibetan Women's Uprising Day at Mcleod Ganj, Dharamshala, India. After the event, hundreds of Tibetan women and Tibetans marched from Mcleod Ganj to Kacheri in Dharamshala to pay homage to the Tibetan martyrs who sacrificed their lives for the cause of Tibet since 1959 and to protest against China's illegal occupation of Tibet.

The peace march from Mcleod Ganj to Kacheri, organised by the Central and Regional Tibetan Women’s Association While marching, they raised the following slogans: "Free Tibet, China, get out of Tibet", "Stop torture and genocide in Tibet", "Free the Panchen Lama", "Tibetans want to be free from Xi's bloody rule", "World Leaders, support Tibet".

“Today, we, the Tibetan Women's Association, honor the 63rd anniversary of National Tibetan Women's Uprising Day. March 12, 1959, is a significant day in the history of Tibetan women, a date on which Tibetan women rose united against the brutal crackdown of the Chinese government in the capital city of Lhasa outside Potala's palace, the Drebu Yulkhey ground. Section of women, particularly Pamo (martyr) Kusang charged on stage along with thousands of Tibetan women to protest against the illegal occupation of Tibet by Communist China. During this uprising, hundreds of Tibetan women lost their lives in the brutal crackdown, and many of them were arrested, imprisoned, tortured, and beaten without trial. For in 1970, Pamo kunsang, Pamo Sangnang choedon, Pamo thachok bhuti, and 4 other Pamos, were massacred in Lhasa, drashi tongkhang (jail) and were buried alive. We stand in solidarity with all the supreme sacrifices made by these martyrs,” said a statement released by Tibetan Women’s Association on March 12, 2022.

“March 12, 1959, mark a crucial day in our Tibetan history. Tibetan women's Association and regional chapters commemorate this day and request all the Tibetan women around the world to remember and honor the great sacrifices that all these martyrs have made to preserve our culture, identity, and freedom. In their name, we vow that these hardships will not be had in vain. We are deeply humbled by the sacrifices of the older generations of Tibetans and inspired to continue the struggle in exile,” it stated.

“After 63 years of occupation, Tibet today is still in shambles: the people are silenced violently; there is no freedom of faith; the developmental and economic plans introduced by the State do not benefit the Tibetan people. They are still punished for raising their voices for human rights and are subjected to gender-specific torture. Tibetan women are being stripped of their fundamental reproductive rights by oppressive Chinese health policies. They face forced sterilization and forced abortion, and female infanticide,” TWA said.

“China has moved more than two million Tibetan nomads from the land they have lived off for generations to barrack-like urban settlements. Without the skills to obtain work in an urban environment, nomads face poverty, unemployment, and social exclusion. The once serene and rich environment of Tibet is now on the verge of annihilation; and the cultural, linguistic, and religious identity of a race is under threat,” they added. “It is high time for the leaders of the free world to stop China with its atrocities, take appropriate measures against the Chinese Human rights violation and call for appropriate action against the Chinese government until they are genuinely committed to resolving the issue in Tibet,” TWA urged.

"We commemorate this day with the deepest of hopes for human rights, peace, and freedom in Tibet and the other regions of the world where peace is held hostage by brutal regimes," TWA concluded.