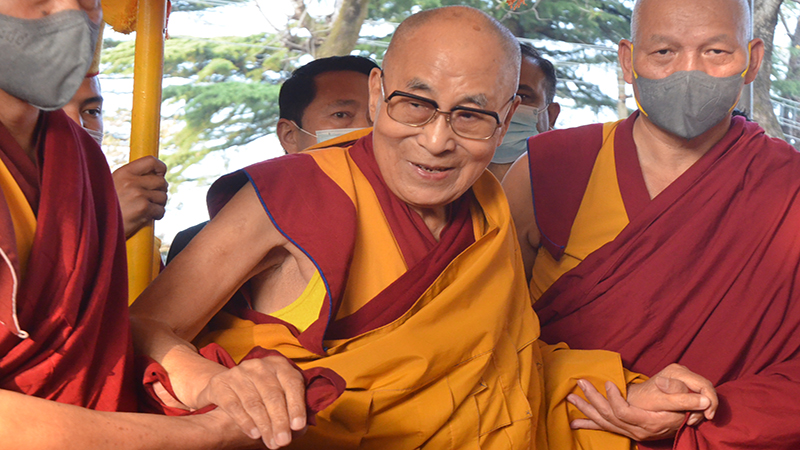 His Holiness the Dalai Lama smiles at the people, while the people welcome him with tears of joy, on March 18, 2022. Photo: TPI/Yangchen Dolma

Dharamshala, India — His Holiness the Dalai Lama gives a short teaching from the Jataka Tales to Tibetans at the main Tibetan temple in Dharamshala on March 18, 2022. He said, "Even though, I am living in India, my thoughts are on Tibet and the preservation of Tibetan religion and cultural traditions, which can help the world community to achieve peace."

His Holiness the Dalai Lama gives a short teaching from the Jataka tales to more than a thousand Tibetans and other devotees, followed by the Ceremony for Generating the Awakening Mind at Tsuglagkhang, the main Tibetan temple in Dharamshala, HP, India on the fifteenth day of the new Water-Tiger Year, March 18, 2022.

His Holiness the Dalai Lama said to the public, “I had thought of going to Delhi around now to have a medical check-up as usual. However, I am in good health, so I decided not to go, maybe I will go later.”

“First of all, I want to tell the audience that the “Buddhas do not wash away sins with water, Nor do they remove the sufferings of beings with their hands, Neither do they transplant their own realization into others. Teaching the truth of suchness they liberate (beings).” This means that the Buddha does not wash away your sins with water, does not remove your suffering with his hands, and does not pass on his knowledge to people, but by learning his teachings, such as the Four Noble Truths, can remove the suffering of people,” His Holiness the Dalai Lama explained.

“The Buddha first taught the Four Noble Truths, then later, at Vulture’s Peak, he presented the essence of his doctrine, the Perfection of Wisdom teachings that are summed up in the Heart Sutra that we regularly recite,” he continues.

“I do my best to reflect on the teaching of emptiness, which I find helpful when it comes to tackling negative emotions. Our destructive emotions do not come from outside the body, but from within, so we must tackle the emotions from the inside, if you can reduce them, you will naturally feel at peace. We Tibetans have a special relationship with Avalokiteshvara and the awakening mind, the intention help other beings and reach Buddhahood,” he added.

"We are gathered here on this special occasion to remind teachings of Buddha, the Buddha's teaching can only be preserved through study and practice, and that by doing so we can share it with others in many parts of the world," the Spiritual leader of Tibet said.

His Holiness the Dalai Lama told the schoolchildren in front of him that he had requested the help of Pandit Nehru, the Indian Prime Minister, to establish specialised schools where Tibetan students could study in Tibetan. Therefore, learning Tibetan is very important because the rich Buddhist teachings in the Tibetan language help not only us, but the whole world.

He noted that although they are physically in exile, Tibetans in India and elsewhere continue to feel close to their own traditions, religion, and culture. He said that he was doing his best and that they too should do their best to preserve this heritage. "Even though, I am living in India, my thoughts are on Tibet and the preservation of Tibetan religion and cultural traditions, which can help the world community to achieve peace," His Holiness said.

He admitted that he was getting older, but said he would still be around for a decade or more, able to lead and encourage. He noted that his knees hurt, but that he could still lead, even if he was leaning on a cane.