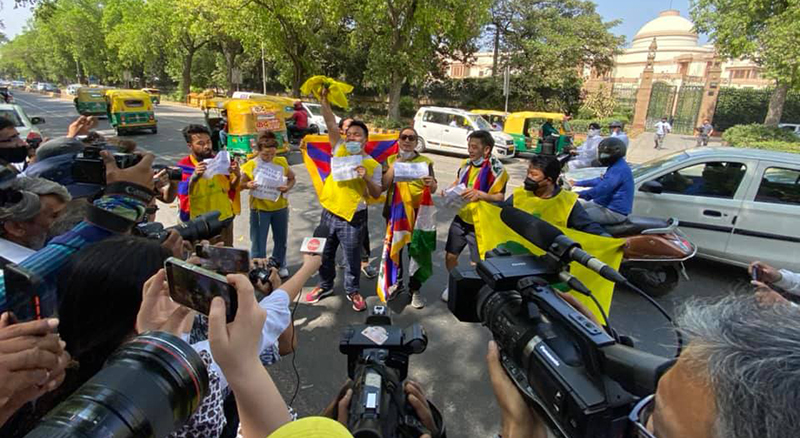 Tibetan youth activists held a peaceful protest against Chinese Foreign Minister Wang Yi's state visit to India, on Friday, March 25, 2022 and have strongly urged the leadership of India to hold the Chinese communist authoritarian leaders accountable for their inhumane acts against the people of Tibet, including human rights violations and arbitrary arrests of innocent people, including prominent intellectuals and religious figures.

A group of members of the Tibetan Youth Congress (TYC) and Students for Free Tibet (SFT) organised a joint protest outside Hyderabad House, Ashoka Road, New Delhi, on March 25, 2022, when Chinese Foreign Minister Wang Yi was discussing the "Line of Actual Control" between China and India with Indian leaders. "All protesters have been detained and are in custody at Mandir Marg police station in New Delhi," organisers told TPI.

SFT members staged a non-violent demonstration at the Indian airport on March 24, 2022 on Yi's arrival and condemned his country China for its atrocities and crimes committed against humanity in Tibet and in other occupied territories.

SFT is a global grassroots network of students and activists working in solidarity with the people of Tibet for human rights and freedom. It uses educational, advocacy and non-violent direct action to achieve independence of Tibet from China.

In response to the arrival of the Chinese foreign minister in India, TYC issued a statement condemning Wang Yi's state visit and saying: "TYC expresses serious concern on the current critical situation in Tibet and urges Indian External Affairs Minister S. Jaishankar to bring up the issue of Tibetan freedom with their Chinese counterparts."

“While we recognise that this meeting is a great opportunity for India and China to push for progress, we strongly urge Indian leaders to hold the Chinese leaders responsible for their actions in Tibet," it said, adding, "with the illegal occupation of Tibet by China, the border disputes between India and China have become tenser and Chinese forces have time and again tried to illegally intrude on the Indian Soil."

"The constant transgressions from the PLA at the Indo-Tibet border was never an issue before 1959. Hence, to combat and control the forceful intrusion of Chinese forces on Indian soil, Tibet's independence remains the only viable solution,” the TYC statement further reads.

TYC accuses China of prolonged state repression and atrocities in its policies and says that “the current Chinese Communist Government is directly responsible for the current spate of tragic events unraveling inside Tibet including Human Rights violations and tightened restrictions on freedom of religion.

"Since 2009, more than 158 Tibetans have self-immolated in Tibet, the fate and conditions of the rest are still unknown, and their protests are taking place across the plateau demanding the return of His Holiness the Dalai Lama, freedom for Tibet and independence for Tibet," the statement adds.

Condemning Yi's visit to India, the groups say they are strongly critical of China for all the decade long lying, misleading, bullying, falsifications and the atrocities committed not only against people of Tibet, but against the world at large.

"We believe it is time for the Indian leadership to confront the Chinese leadership on the issue of Tibet and use diplomatic measures, sending a strong message that human rights and human lives are as important as trade and the economy," TYC concluded, making the following three demands:

TYC is the largest youth organisation in exile, with over 30,000 members and 87 branches in 10 countries, leading the peaceful struggle to liberate Tibet from China's illegal occupation, with the ultimate goal of achieving independence for Tibet.