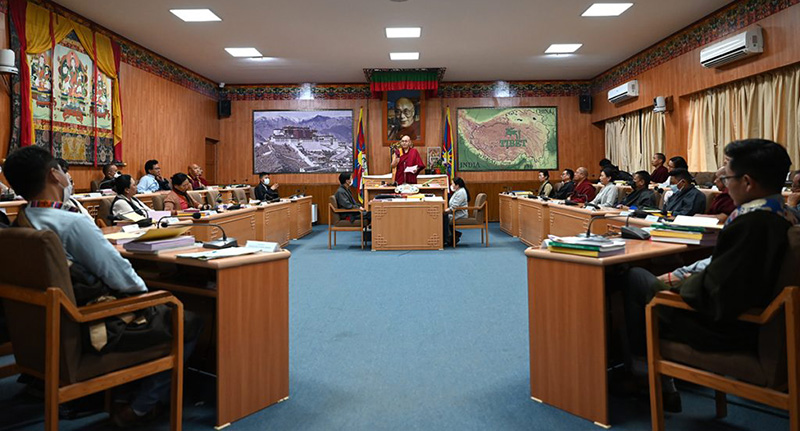 The official resolution on the critical situation of Tibet's environment, mentioned, “ Due to its high elevation, the Snow land of Tibet is referred to as the ‘Roof of the World’ or the ‘Third Pole’ of the earth. Since the Tibetan plateau was formed, the external physical environment and the internal life forms have existed in harmony with each other on the plateau. Despite social progress and development, the Tibetan people have lived in harmony with its natural environment based on the principles of its religious traditions and cultural laws. As a result, the Tibetan plateau has existed as a pure and pristine realm for thousands of years until Tibet’s invasion by the Chinese Communist forces.”

“Situated at an elevation of over 4000 meters, the Tibetan plateau is the highest and largest plateau in the world. With a total land area of 2.5 million square kilometers, the Tibetan plateau contains more than 46,000 glaciers covering an area of 1,05,000 square kilometers. It is the largest source of freshwater in the world and has the highest reserves of ice sheets outside of the two poles. For that reason, Tibet is now referred to as the third pole of the earth. The Tibetan Plateau is the source of most of Asia’s major rivers including Indus, Brahmaputra, Sutlej, Ganges, Yangtze, Yellow River, Mekong, Salween, etc. Over a billion people in the downstream countries such as Pakistan, Vietnam, Nepal, Bangladesh, Burma, Thailand, Laos, and Cambodia including India and China, the two most populated countries in the world depend on these rivers originating in Tibet for their livelihood and sustenance,” the resolution stated.

“Since the invasion of Tibet in 1949 and the complete occupation of Tibet in 1959 by the Chinese Communist forces, the Chinese government has implemented various disastrous campaigns such as the Cultural Revolution to annihilate Tibet’s traditional culture. Since the 1970s, China has intensified its policies of deforestation, mining, and damming of rivers in Tibet to destroy Tibet’s fragile environment. At the same time, under the pretext of building highways, railway lines, and airports, China has stepped up its practice of destructive development practices on the Tibetan plateau. Due to this rampant violation of Tibet’s ecology, Tibet has witnessed a series of unprecedented epidemics, famines, landslides, floods, and earthquakes in recent times. Due to climate change on the Tibetan plateau, the seasonal rainfall in many countries of Asia particularly India and China were severely affected leading to frequent natural calamities,” it added.

“In his message to the recent COP 26 climate change conference, His Holiness the Dalai Lama has said: “Our ancestors viewed the earth as rich and bountiful, which it is, but what’s more it is our only home. We must protect it not only for ourselves, but also for future generations, and for the countless species with which we share the planet.” His Holiness further said: “The melting of Tibet’s numerous glaciers, the damming and diversion of rivers, and widespread deforestation, exemplify how ecological neglect in one area can have consequences almost everywhere.” As these statements indicate, the ecology of the Tibetan plateau is deeply connected to the larger ecology of the entire earth,” it mentioned.

“The Chinese government continues to propagate that it has brought development to Tibet by building highways, railways, and airports, and that the conservation efforts of Tibet’s environment have progressed over the years. In reality, the Chinese government has accelerated the continued destruction of Tibet’s fragile environment. As stated in the book published by the Central Tibetan Administration’s Department of Information and International Relations (DIIR) titled ‘Tibet: Seventy Years of Oppression and Repression’, it says: “With the construction of new railway lines to Lhoka, Shigatse, and Nyingtri, China continues to exploit the huge mining opportunities in the area. Some of the copper and gold mines such as Gyama and Shetongmon were operational since the 1970s and others such as Norbusa (chromium and iron) and Drag-ye Tsaka (lithium) mines are set to expand their operation with connection to highways and new railway lines.” These development activities aimed solely to fulfil the demands of the Chinese government have led to a rampant exploitation of Tibet’s natural environment resulting in the continued deterioration of Tibet’s ecology. Moreover, China has made Tibet into a dumping ground for toxic chemical and industrial waste. With the establishment of numerous military stations in Tibet, China continues to intimidate the Tibetan people by carrying out military exercises and trainings. The recent military and weapons exercises at the Indo-Tibetan border have made this fact extremely clear. Due to these activities by the Chinese government, the pure and pristine ecology of the roof of the world has been transformed into a polluted land filled with toxic waste. This has endangered the lives and livelihood of around a billion people in Asia who depend on the rivers originating in Tibet. This is a direct consequence of China’s failed policies on Tibet’s environment which the neighbouring and all related countries should take note of,” the resolution explained.

“China has announced that it has spent several billion Chinese Yuan (CNY) on water and garbage clean-up initiatives to show its leadership on environment conservation. However, this is an attempt to mislead the global public. The influx of Chinese tourists into Tibet and the garbage that they left behind have severely polluted the Tibetan plateau endangering both livestock and people. At least 70% of Tibet used to be grassland out of which over 60% were highland grassland. Anthropologists have stated that Tibetans have lived on these highland grasslands for over thousands of years. Scientists have also stated that raising livestock and grazing on these highland grasslands is a sustainable form of grassland management. However, the Chinese government claims that livestock grazing has led to the destruction of grassland, and as a result it has forcibly removed Tibetan pastoral nomads from their traditional habitat and destroyed their age-old practice of livelihood. This is clearly evidenced in the above mentioned book ‘Tibet: Seventy Years of Oppression and Repression’ wherein it says: “China claims that it has removed 2,66,000 Tibetan nomads from ‘inhospitable lands’ into one of 964 relocation camps constructed since 2016.” This is a wrong and unscientific policy pursued by the Chinese government. Since the occupation of Tibet by the Chinese Communist government, it has continued to pursue policies to completely annihilate Tibetan culture. At the same time, China’s continued destruction of Tibet’s natural environment has become harmful not just to Asia but to rest of the world as well. We hereby see it imperative to pass this resolution to urge China to stop these practices of destroying Tibet’s environment and ecology,” the resolution stated.

1. To ensure the stability and security of the people, economy, and environment of Asia as well as the world, China should work towards the restoration and conservation of the Tibetan plateau’s natural environment. China should wholeheartedly respect the harmonious nature of the traditional Tibetan lifestyle and stop criminalising Tibetan environmental activists and advocates.

2. Tibet has suffered an unprecedented series of landslides, avalanches, floods, and earthquakes in recent times. To prevent such natural calamities, China should stop the rampant deforestation and excessive mining of Tibet’s natural resources. It should take reforestation initiatives and also accurately report the factual ecological situation on the Tibetan plateau and stop its practice of covering up the disastrous impacts of its failed environmental policies.

3. China should carry out a scientific assessment of the ecological impacts and the effects on the traditional lifestyles of the Tibetan people before initiating development projects and mining activities on the Tibetan plateau. Based on this assessment, China should formulate environmental policies which should be made public. It should also restrict the dumping of chemical and industrial waste in Tibet.

4. The Tibetan public and administration should make efforts to urge the United Nations Environment Programme to conduct a scientific research on the significance of Tibet’s environment particularly its impacts on global warming and climate change, and publish the report at the UN’s global environment conference.

5. Efforts should be made for world leaders to recognise the significance of Tibet’s natural environment and ecology, and raise the issue of Tibet’s environment at global environment conferences for fruitful discussions and decisions on the same. And so be it adopted accordingly with the unanimous approval of the Tibetan Parliament in-Exile on 22 March 2022.

The environmental resolution passed with unanimous approval by the 17th Tibetan Parliament-in-Exile at its 3rd session on March 22, 2022.

In his closing speech, Khenpo Sonam Tenphel, the Speaker of the TPiE, informed the House about the obituary references, the solidarity resolution, the resolution on Tibet's environment, and the clarification of the Kashag, the financial affairs, and other official resolutions passed during this session. He offered his condolences on the sad news of the self-immolation in Kyegudo in the traditional province of Kham on March 30, 2022, and the self-immolation of Tibetan famous singer Tsewang Norbu on February 25, 2022, in front of the Potala Palace in Lhasa, the capital of Tibet. He then advised the parliamentarians to move forward for the common cause of Tibet without clinging to certain issues of the past.