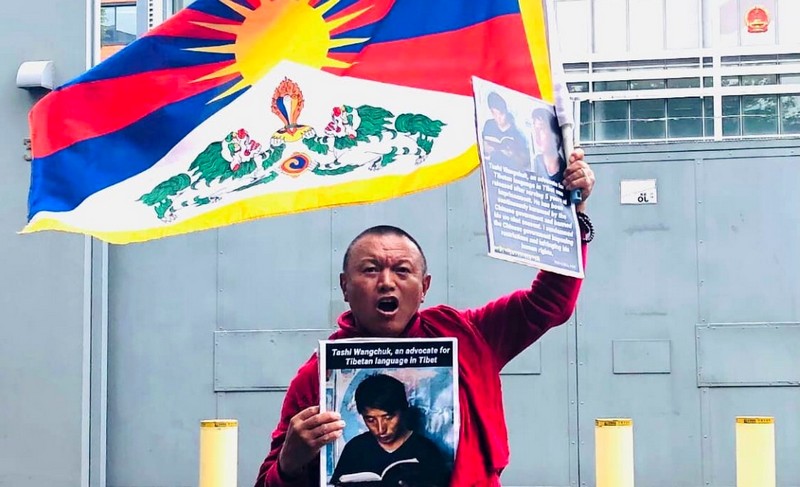 Former political prisoner Ven Bagdro on Friday conducted a solo protest in front of the Chinese Consulate General in Sydney, calling on the Chinese government to end all tightened restrictions on Tashi Wangchuk, an advocate for Tibetan language rights in his home country.

"I have protested in front of the Communist Chinese Consulate in Sydney, Australia, on 22 April 2022. The purpose of the protest was to draw attention to the fact that Tashi Wangchuk, an advocate of Tibetan language rights in Tibet, had been released after a five-year imprisonment," Bagdro told the TPI.

The former Tibetan teacher and activist was given five years in prison for advocating the need and importance of preserving the Tibetan language in Tibet and for Tibetan language education was being repressed by the Chinese government in Beijing.

"After being released from a Chinese prison, he has been under very strict restrictions and intense surveillance. I am deeply concerned about his wellbeing and safety. Therefore, I have protested in front of the Chinese Consulate General in Sydney and calling for all these restrictions imposed by the Chinese government on the former political prisoner to be lifted," he further added.

The Tibetan activist, who was also an entrepreneur, had been sentenced to five years in prison on 22 May 2018 for "inciting separatism". The charges stemmed from his peaceful advocacy of Tibetan language rights in his own country.

The regime uses assimilation techniques, such as restricting the teaching of non-Chinese languages such as the Tibetan language, to promote Mandarin Chinese as the dominant language, and these assimilation policies have been continued throughout the occupied territories.

The language rights of other nationalities considered "ethnic minorities", such as Tibetans in Tibet and Uighurs in East Turkestan, have been expressly guaranteed by both China's Constitution and the so-called law on regional ethnic autonomy in China, but no practical implementation or consideration has ever taken place.

"When I first arrived in Australia, with little knowledge of the way of life, place and customs, I was unsure of what to do, even if I wanted to hold at least some protests. But now I feel much improved and equipped in continuing my efforts towards struggling for Tibet," said Bagdro with a strong sentiment.

"All my peaceful protests have been mainly three hours, sitting in front of the Chinese consulate, and seeing the officials often watching my movements from the office windows, showing all sorts of reactions towards my protests, such as being misbehaving and becoming increasingly frustrated. However, I feel satisfying since my main objectives are to get their attention," he continued.

Bagdro is a Tibetan monk who was imprisoned in Tibet in 1988 for his involvement in peaceful protests against the Chinese invasion of Tibet when he was just 20 years old. Since escaping to India, he has authored several books, including "Tibetan Spirit Cannot be Crushed", explaining the history and current situation in Tibet through a series of photographs, and "A Hell on Earth", his own biography. He currently lives in Newcastle, New South Wales, and often holds his peaceful protests in Sydney, against the ongoing Chinese repression in Tibet.