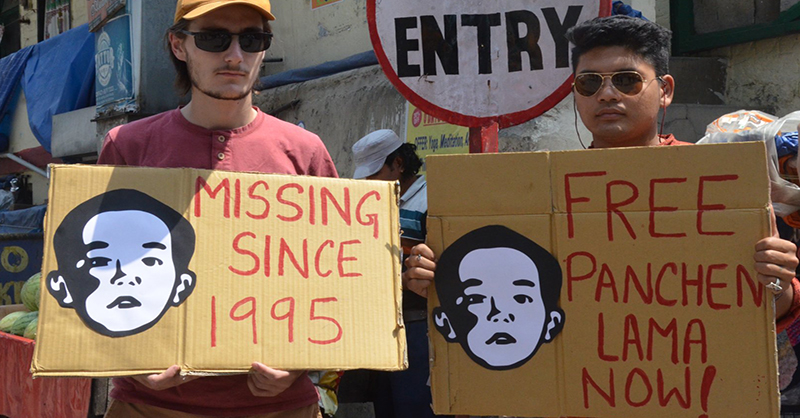 Several SFT activists began the awareness campaign with a 6-point information brochure and held up banners reading "Free Panchen Lama now" and "He has been missing since 1995." The campaign covered Dolma Chowk, Bhagsunath, Dharamkot in Mcleod Ganj, Main Chowk and Petrol Pump in Dharamshala and Norbulingka, on May 17, 2022.

The 6-point information booklet entitled "Six Things You Should Know About the Panchen Lama of Tibet:

1. Youngest political prisoner in the world
On May 14th 1995, a 6-year-old boy, Gedhun Choekyi Nyima was recognized as the 11th Panchen Lama by His Holiness the Dalai Lama. Within three days of the announcement, the Chinese authorities kidnapped the young child and his family.

3. Unique relationship Dalai Lama
The The relationship between the Dalai Lamas and the Panchen Lamas is unique. In fact, it was the fifth Dalai Lama who bestowed the title of Panchen Lama meaning Great Scholar, to an abbot of Tashi Lhunpo monastery, Lobsang Chokyi Gyaltsen (1570-1662). Each lama in their lifetime is not only involved in the search for the other reincarnations, but also assumes the role, first as the disciple and later in life as the teacher, of the other

4. Previous incarnation died mysteriously
In 1985 at the grand Monlam Festival in Lhasa, the Panchen Lama publicly expressed his allegiance to His Holiness the Dalai Lama. A few years later he stated that Chinese rule in Tibet has brought more destruction than benefit to the Tibetan people; this became his last public statement. He then suddenly died in Tashi Lhunpo Monastery. Many suspected that the Panchen Lama was poisoned by forces working for the Chinese government.

5. Selection of the 11th Panchen Lama
After the Dalai Lama named Gedhun Choekyi Nyima as the 11th incarnation of the Panchen Lama on May 14, Chinese authorities had Chadrel Rinpoche arrested and charged with treason. According to the Tibetan Government in Exile, he was replaced by Sengchen Lobsang Gyaltsen, so chosen because he was more likely to agree with the party line.

6. This year marks the 21st anniversary of Gendun Choekyi Nyima's disappearance, whose fate remains of deep concern to many Tibetans.