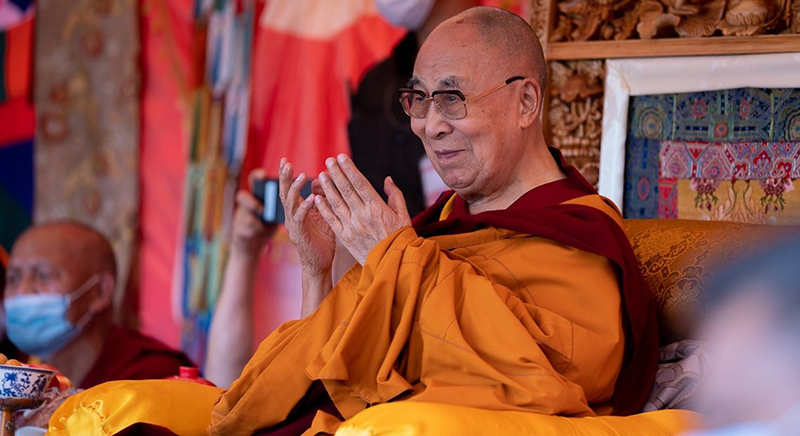 Ladakh, UT, India — “Since Ladakh is a border region, my travels will not go unnoticed across the frontier. A smiling Dalai Lama meeting people who show such deep faith and trust in him not only gives inspiration to Tibetans in Tibet, but for them is also a source of pride. Despite some rigid communist officials labelling me a reactionary, when they see a perpetually smiling Dalai Lama doing his best to serve humanity, they might doubt the harsh policies they have imposed on Tibetans,” said His Holiness the Dalai Lama on August 25, 2022.

His Holiness began his speech by saying: “During my recent travels across Ladakh and Zanskar, I was very touched by the deep reverence and affection shown to me by people from all sections of the community. It made me feel that I must live long to serve people with such a sense of devotion. Such a display of brotherhood and sisterhood among people belonging to different spiritual traditions is admirable.

“People from Ladakh to Arunachal Pradesh share the same Tibetan Buddhist culture, a culture of peace and compassion. I would like to express my deep appreciation of the way you are contributing to the preservation of this Buddhist culture. It is derived from the historic Nalanda University, where learning was based on reasoned investigation,” His Holiness said.

“Since Ladakh is a border region, my travels will not go unnoticed across the frontier. A smiling Dalai Lama meeting people who show such deep faith and trust in him not only gives inspiration to Tibetans in Tibet, but for them is also a source of pride. Despite some rigid communist officials labelling me a reactionary, when they see a perpetually smiling Dalai Lama doing his best to serve humanity, they might doubt the harsh policies they have imposed on Tibetans,” the spiritual leader of Tibet said told to the audiences.

“What’s more, even among Chinese people, there is a growing interest in Buddhism, particularly the Nalanda tradition that Tibetans have kept alive. Although Chairman Mao told me in 1955 that religion is the opium of the people, I feel that if he were alive today, he might retract that judgement,” he explained.

“Cultivating the awakening mind of bodhichitta, has long been my daily practice. And this morning too, as I was coming to meet you, I was doing that practice as we passed the long Manthang-an at Choglamsar, the wall heaped with thousands of stones inscribed with mantras, including the six-syllable mantra of Avalokiteshvara,” His Holiness described.

“As I have said time and again, all the major religions teach about love and compassion, despite adopting different philosophical points of view. And this is the reason I make a point of praying at the places of worship of different faiths.

“I was born in a remote part of north-eastern Tibet. When the Regent, Reting Rinpoché and other dignitaries including Kewtsang Rinpoché offered prayers at Lhamo Latso, the lake sacred to Palden Lhamo, not far from Lhasa, seeking signs of where to look for the reincarnation of the 13th Dalai Lama, they saw three Tibetan syllables on the surface of the water: A, KA, and MA, They also the likeness of a house and its surroundings.

“As it turned out, from early in the morning that Kewtsang Rinpoché and his delegation were due to arrive at my birthplace, seeking my predecessor's reincarnation, I have been told that I was very excited and expecting guests. When Kewtsang Rinpoché reached Taktser, my village near Kumbum, he felt that it was the very place he had seen in Lake Lhamo Latso,” he explained.

“Moments after the search party entered our house, this two-year-old boy asked Kewtsang Rinpoché to give him the rosary he had round his neck claiming it as his own. In fact, it belonged to the Great 13th Dalai Lama. When Rinpoché asked the child if he recognized him, he instantly called out, "Sera Aka!", which means Lama from Sera Monastery,” His Holiness said.

“In due course, I reached Lhasa and took the three vows: Upasaka (the vows of a Buddhist lay person), the novice and Bhikshu—fully ordained monk—vows in front of the Chenrezig statue in the Jokhang, the main temple in Lhasa. In addition, as a child I began to study Buddhism with my tutors, chief of whom was Yongzin Ling Rinpoché,” he added.

“I have had the opportunity to memorize classic Buddhist texts and study them in great detail. I am also grateful that these studies prepared me for deep discussions with scientists, particularly in regard to Buddhist philosophy, but also Buddhist psychology, which, I am convinced, has much to contribute to a better understanding of how to train the mind and emotions from a secular, academic point of view,” His Holiness said. Next, His Holiness paid a brief farewell visit to the former Gaden Tripa, His Eminence Rizong Rinpoché, who is 96 years old, at his residence in Leh. He is someone from whom His Holiness has received many teachings.

His Holiness attended a farewell luncheon offered by the Ladakh Buddhist Association (LBA) and the Ladakh Gonpa Association in his honour at Abi Pang Spituk, a huge park on the outskirts of Leh. Among those present were eminent officials, as well as elected representatives of the LAHDC, district officials, representatives of religious communities, and members of the public.