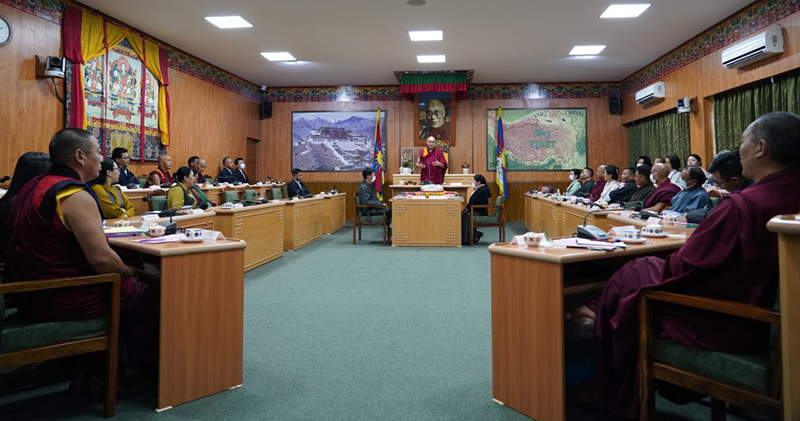 Dharamshala, India — The 17th Tibetan Parliament-in-Exile convened its 4th session on September 7, 2022, with three bills on official commemorations and obituaries and a bill on official solidarity regarding urgent situations in Tibet.

The 4th session (general session) of the 17th Tibetan Parliament-in-Exile (TPiE) is scheduled to be held for nine days from September 7 to 16, 2022 at the Parliament hall of TPiE, Gangkyi, Dharamshala, H.P, India. The Speaker of the Tibetan Parliament-in-Exile, Khenpo Sonam Tenphel, presided over the meeting, while the Deputy Speaker, Dolma Tsering, members of the 17th Parliament and the Sikyong (President) Penpa Tsering and the Kalons of the 16th Kashag attended the session.

"As the primary objective of the Central Tibetan Administration is to resolve the Tibetan issue and ensure the welfare of Tibetans in exile, parliamentarians, who are representatives of the public, must remain firm in their belief in the basic principles of democracy and, at the same time, make a collective effort to advance the Tibetan movement," said the Speaker of the Tibetan Parliament-in-Exile.

In the run-up to the National Congress of the Chinese Communist Party and the uncertainties it may bring for Tibet, the Speaker spoke about the changing political dynamics in China and the urgent situation in Tibet, such as the increasing number of Covid-19 cases and the destruction caused by natural disasters such as earthquakes, floods, etc.

The Speaker referred to the success of the 8th World Parliamentarians' Convention on Tibet (WPCT) held in Washington DC with the support of the Kashag (Cabinet), the International Campaign for Tibet (ITC) and the Tibet Office (Washington) and expressed his gratitude for their valuable support.

MP Geshe Atong Rinchen Gyaltsen presented the official obituary of the late Taphun, an 81-year-old Tibetan who set himself on fire in a protest against the Chinese government in Tibet on March 27, 2022, and subsequently died.

Similarly, an official obituary reference to former Tibetan parliamentarian Jhar-Sangling Tsewang Namgyal was read out by Geshe Lharampa Gowo Lobsang Phende, and an official obituary reference to the late Shinzo Abe, former Prime Minister of Japan and a long-time supporter of Tibet was presented by Serta Tsultrim respectively. A minute's silence was then duly observed in the house in mourning for these official references.

Parliamentarian Lhagyari Namgyal Dolkar presented a 7-point official resolution on solidarity with the Tibetans inside Tibet, which was supported by parliamentarian Geshe Ngaba Gangri. The proceeding continued with parliamentarians deliberating over the aforementioned resolution and its subsequent passage.

The first day of the fourth session of the 17th Tibetan Parliament-in-Exile was adjourned at 5:30 pm, September 7, 2022.