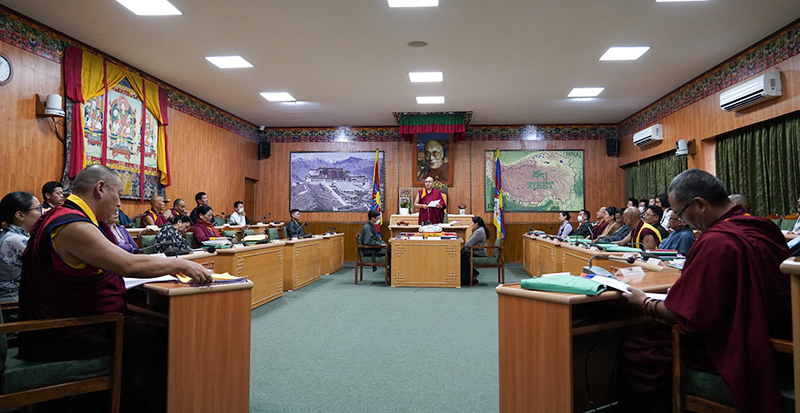 Speaker of the 17th Tibetan Parliament-in-Exile delivering his closing speech at the end of the session on September 16, 2022. Photo: TPiE

Dharamshala, India — The 17th Tibetan Parliament-in-Exile concluded its fourth session on September 16, 2022, with seven solidarity resolutions related to the critical situation in Tibet. The Speaker of the Parliament urged everyone to raise the issue of Tibet on the international platform and make the world aware of the urgent situation in Tibet.

The 4th session (general session) of the 17th Tibetan Parliament in Exile (TPiE) ended on September 16, 2022, at the TPiE Parliament Hall, Gangkyi, Dharamshala, H.P, India. The Speaker of the Tibetan Parliament in Exile, Khenpo Sonam Tenphel, delivered his closing speech at the end of the session and informed the house of the obituary references, solidarity resolutions, official resolutions, legislative and other amendments passed during this session as well as the departmental reports presented to the house.

He emphasized the need to bring the issue of Tibet to the forefront on the international platform by taking advantage of China's changing political dynamics and the importance of the unity of the Tibetan community to advance the common cause of Tibet.

“During the session, we were able to adopt seven solidarity resolutions related to the critical situation in Tibet, on the political situation, human rights, freedom of religion, freedom of language, etc” Speaker Khenpo Sonam Tenphel mentioned.

“Another resolution is on the Middle Way Approach, which urges that the issue between Tibet and China be resolved through the Middle Way Approach, although much depends on the willingness and openness of the Chinese government, but the important thing is that the CTA take more responsibility for resuming the dialogue between China and Tibetan representatives to resolve the issue,” the Speaker said.

“Tibetans in Tibet are facing difficulties, due to China's zero-covid policy, some of them do not have food, in the face of such difficulties, if we did not have political issue (China and Tibet), CTA and individuals can certainly help them, but because of the political issue, we cannot help them directly, we can only make prayers and express our solidarity for our brothers and sisters in Tibet,” the Speaker explained.