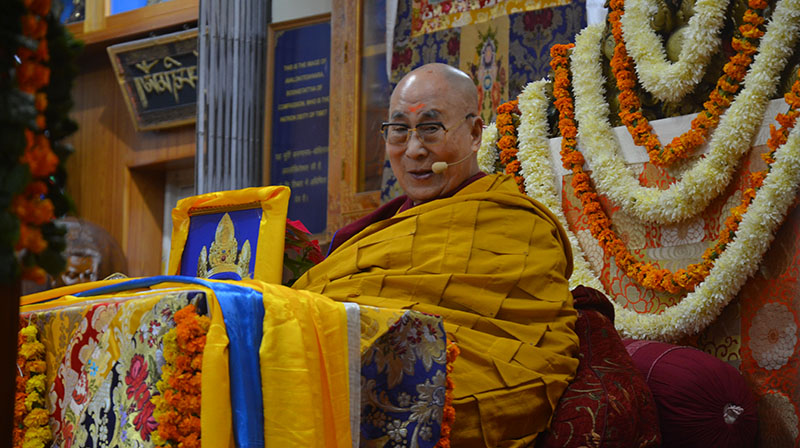 Dharamshala, India – A long life prayer offered to His Holiness the Dalai Lama by Drepung Gomang Monastery and Lhadhen Chotrul Monlam Chenmo Trust on Wednesday. His Holiness said, "Monks and nuns in Tibetan monasteries and in the entire Himalayan region, continue to study and practice the Dharma. Learn to recognise destructive emotions and to tackle them. "

The Drepung Gomang Monastery and the Lhadhen Chotrul Monlam Chenmo Trust offered a long life prayer to His Holiness the Dalai Lama, the spiritual leader of Tibet, at the Tsuglagkhang, the main Tibetan temple, in Dharamshala, HP, India on November 30, 2022. About 4500 people from all over the world gathered to participate in the event, including monks and nuns from different monasteries in India and Tibetans from the vicinity of Dharamshala.

His Holiness the Dalai Lama said after sitting on the throat, “Today, my Dharma brothers and sisters are offering a long-life ceremony on my behalf, on this occasion arrangements have been made by Drepung Gomang Monastery and the Lhadhen Chotrul Monlam Chenmo Trust. I have made a point of bringing with me this photograph of the Chenrezig Wati Sangpo statue that stays in my residence.”

“Chenrezig or Avalokiteshvara is the patron deity of Tibet and I am someone who receives his blessing. I pray every day to this Wati Sangpo. As a representative of the body, speech and mind of Avalokiteshvara I work to fulfil his wishes. And I will continue to do so for the coming decades. Since you are making these prayers and offerings on my behalf today, and since Wati Sangpo is my refuge and guardian, I have brought this photograph of him here with me,” he continued.

“The principal statue of Lokeshvara is in Lhasa, but as a result of certain circumstances this Wati Sangpo came to stay with me here. When I pray to him, I feel he smiles at me. Although he cannot walk or talk, he gives me his blessing and as Chenrezig’s representative, I am determined to fulfil his wishes,” His Holiness added.

“Today, Tibetan lay-people and monastics are performing this ceremony based on White Tara. I appreciate the participation of both Drepung Gomang and the Lhadhen Chotrul Monlam Chenmo Trust,” the spiritual leader of Tibet said.

“Tibetan Buddhism has come to be admired across the world and the monks of Drepung Gomang have contributed to this. As I was born in Amdo I feel a connection to this monastery. You have preserved the Buddha’s teachings through study and practice, not only reading and debating them, but also meditating on them within. I would like to request all the monks of Ganden, Sera, Drepung and Tashi Lhunpo, as well as the monks and nuns of the entire Himalayan Region, to keep up their study and practice. I will give you a lead for the next 10-20 years,” His Holiness mentioned.

“Keep in mind the Buddha’s advice not to accept what he taught just on the basis of faith, but as a consequence of examining and investigating with the rigour that a goldsmith employs when testing the quality of gold. Learn to identity destructive emotions and tackle them. Take a logical approach. These are not just empty words for the extensive and profound teachings of the Buddha can bring us peace of mind,” His Holiness said.

“The complete teachings of the Buddha are only found amongst us Tibetans. Other countries preserve Buddhist traditions, but none of them employs the logical approach we received from the Nalanda Tradition,” he said.

“These days I am up here in the north of India while many of you are in the south. We are physically far apart, but technology allows us easily to be in touch with each other,” the spiritual leader of Tibet said to the monks.

“I urge you to keep up your study and practice, because there is a growing interest in Buddhism in China and other countries. In addition, scientists are paying closer attention to Buddhist psychology,” His Holiness said to the monks.

“As I said earlier, I have brought this picture of Wati Sangpo with me because he is my boss. I clearly have a karmic connection with Chenrezig as was indicated by the three syllables manifest on the surface of Palden Lhamo’s lake. You refer to me as your leader, but I regard him as mine and receive inspiration from him day and night. His blessings flow through me,” he added.

“I would like to thank everyone who has gathered here, but especially the monks of Drepung Gomang,” His Holiness the Dalai Lama concluded.